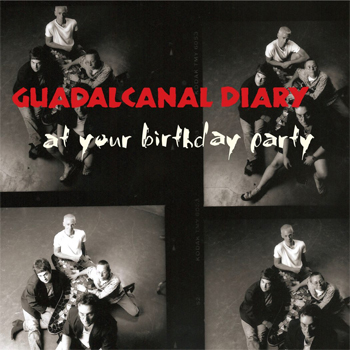 Signed to DB Recs at or near the local label’s commercial high point, Guadalcanal Diary released its debut EP, Watusi Rodeo in 1983. The disc’s catchy yet slightly off-kilter songs (mostly by guitarist Murray Attaway) attracted the attention of Elektra, who soon signed the band. Released in 1984, the Don Dixon-produced Walking in the Shadow of the Big Man exposed the group to a national audience. Three more major-label albums followed: Jamboree (1986), 1987’s 2 X 4, and Flip Flop from 1989. The group never approached the popularity of R.E.M. or B-52’s, but its albums accurately represented the Atlanta brand of college rock as it existed in those years. 2 X 4 in particular is often held up as among the best of Guadalcanal Diary’s work.

But near the end of the ‘90s, Attaway returned to the studio to work on another set of recordings (never released), enlisting the talents of his ex-Guadalcanal Diary band mates. The experience was a positive one for all concerned, and the group reunited. A document culled from a pair of January 1998 shows at Smith’s Olde Bar, At Your Birthday Party was self-released by the group in 1999.

By 2000 the band hit the pause button once again, not officially disbanding. In later years, Attaway would play with guitarist Jeff Walls as Bomber City, and included Guadalcanal favorites in the band’s live set. Now, some 18-plus years after its original release, At Your Birthday Party is getting a major-label reissue courtesy of Omnivore Recordings, an outfit dedicated to interesting curated releases such as the back catalog of groups like Trip Shakespeare, Jellyfish, Game Theory and the Posies.

At Your Birthday Party is right at home among fondly-remembered albums from those other college rock / power pop heroes. The high-energy set doesn’t exactly recall Steppenwolf (likely the first rock band to use that album title), but the quartet charges through a 16-song set that draws nearly equally from all of its albums, adding one tune (“Pau Pau”) not found on any of those studio releases.

The band had been served especially well on its sessions with Don Dixon (Walking in the Shadow of the Big Man and 2 X 4); Dixon did a superb job of capturing the band’s live sound without adding needless filigree. This professionally-recorded live set achieves a similar unvarnished yet tight vibe; though by the time of its recording, the band’s Elektra days were eight years in the rear view mirror, on this live album, Guadalcanal Diary parties like it’s 1989.