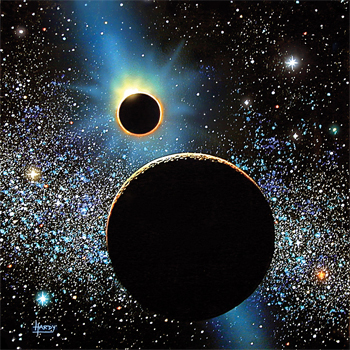 From the outset, All India Radio is all over the map. The name suggests a group from the Indian subcontinent, and the music draws clear inspiration from British late-period psychedelic/space rock (most notably Pink Floyd) and late-late-period American psych revival (specifically Flaming Lips). After all that, All India Radio is actually an ambient/chillwave group from Melbourne, Austrailia.

The tunes on Space (the group’s fourth full-length release) float by, as one would expect. There’s a strong melodic element to songs like “Vega,” though, one that would be out of place among most trance-focused artists. The keyboard textures are familiar ones: Hammond organs, Mellotrons, gurgling ‘70s-era analog synths (or at least their modern-day digital counterparts) abound. A more ‘80s feel – via creamy synth pads – crops up here and there as well. And the moaning, keening sound of steel guitars is a prominent feature, evoking thoughts of both David Gilmour and Yes’ Steve Howe.

Most of Space is instrumental, and when vocals do appear, they’re by singer/songwriter Leona Gray; her sultry down-tempo vibe compares favorably with the early releases from Zero 7, and Gray’s impressive range finds her effortlessly reaching for the upper register. “Holding” features some wonderfully soaring lead vocals from Gray, with the instrumentalists laying down a wonderfully glacial backdrop a la At War with the Mystics.

“Heirs of Ineptune” features a throbbing synth line that recalls the Alan Parsons Project’s I Robot LP, with heavily reverberated spaghetti-western guitar (and some Animals-era styled electric piano) added for good effect. Fellow dream-pop auteur Steve Kilbey (of the Church) lends his moody spoken-word talents to “Euridyce in Scarlet,” the album’s most dance-oriented track. With its appealing guitar work, the melancholy “Theo’s Sunlight Dream” is perhaps the most finely textured of the tracks on Space, but all eight cuts have their charms. The drum machine vibe of “Sonda IV” closes the album on a slightly more futuristic (or perhaps retro-futuristic) note, calling to mind the work of Jean-Michel Jarre.

A fun fact – mentioned in the press kit accompanying the album – is that the cover art, “Eclipse,” was allegedly commissioned by Pink Floyd to serve as the cover art for one of their albums. It went unused; the band came up with a different title for their new work, and put an image of a prism on the cover instead. True anecdote or not, 45 years later, Hardy’s work fits the music on Space perfectly.