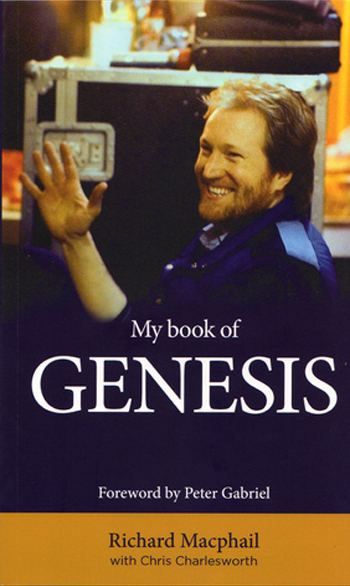 I really enjoy reading behind-the-scenes and/or personal memoirs about the different corners of the music world. While reading autobiographies by big names has its rewards, I tend to find greater pleasure in the stories as told by those close to those figures as opposed to books authored by the “stars” themselves. I find that just a little bit of distance adds a useful perspective.

A fine example of this is My Book of Genesis, written by Richard Macphail (with assistance by esteemed music journalist Chris Charlesworth). Macphail was the original vocalist in an embryonic lineup of the group that would become Genesis, and went on to be roadie, road manager and general friend and factotum to the band. His role in Genesis was a bit (but only a bit) like Peter Sinfield’s place in early King Crimson: a nonperforming member of sorts.

Macphail has a keen memory and a witty, erudite style that is neither self-important nor pretentious in any way. He’s not the sort of historical chronicler who inserts himself into every story and makes himself out to be the hero; he’s far more than a bystander, but his modest perspective makes it clear that he’s among the biggest fans of Genesis.

That doesn’t mean his an uncritical observer. One of the nice things about Macpahil’s approach to writing My Book of Genesis is that he enlists the help of former members in that band, often setting aside his own words to let them give their own perspectives. The effect of this is to allow the oft-remarked-upon personalities of, um, certain members of the band plenty of room to reveal themselves. This, instead of Macphail commenting on the ways in which so-and-so may have been difficult to deal with now and then.

Macphail’s personal story, of course, extends farther back than his school years with Rutherford, Gabriel et. al., and of course it extends forward after his formal association with the band ended. It’s a credit to both the writing style of this book and to the varied textures of Macphail’s life that the chapters covering those years are every bit as interesting as the parts that dive deep into the world of Genesis.

Some of what readers will find within the pages of Macphail’s book won’t come as a surprise. For example, Phil Collins is down-to-earth and a really nice guy. Steve Hackett was unsure of his ability (and suitability for the group) when he first starting playing with Genesis. Peter Gabriel is sometimes a bit odd. Tony Banks and [fill in the blank] didn’t always get on well. But in Macphail’s telling, these non-revelations take on a more human dimension, and the reader will come away with a better understanding of the band members as people, not just as talented-as-hell musicians.

For his part, Richard Macphail comes off as the sort of person with whom one would love to share a pint or six, and it seems a safe bet that – although My Book of Genesis is filled with wonderful anecdotes we haven’t seen elsewhere – if conditions were right, he might reveal a few other entertaining stories that didn’t make it into the pages of this delightful book.

Highly recommended to Genesis fans, and recommended without reservation to non-fans as well.