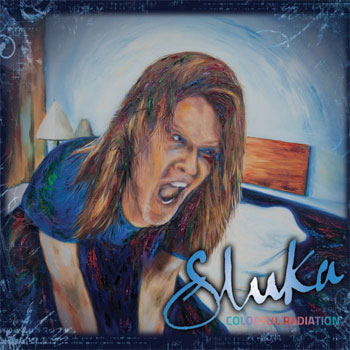 I try not to be overly influenced by an album’s cover art: don’t judge a book, etc. But the gruesome artwork on this one nearly scared me off. The music deserves better. Multi-instrumentalist Christopher Sluka has a voice eerily reminiscent of David Bowie, and though he’s not an artist of the late Thin White Duke’s caliber (precious few are!) he has plenty of musical ideas. And he seems intent on stuffing as many as possible into each song. For the engaged listener, that’s a good thing: “Number one” has enough ideas for several tunes. The more casual listener might get fatigued a bit spinning this disc, but if so, it’s their loss.

Oddly enough, that dire cover art is by Sluka himself. But hey: I’m a music critic not a visual art critic. Sticking instead to the songs – ten of them – is a rewarding experience. I though I detected a vaguely European sensibility within Sluka’s originals songwriting and arrangement, but as it happens he’s a L.A. by way of NYC artist. He explores a variety of textures: drone, trance and so on – within the context of ear candy melodies. Colorful Radiation is ambitious, but ultimately the music holds up to – and delivers on – that ambition.