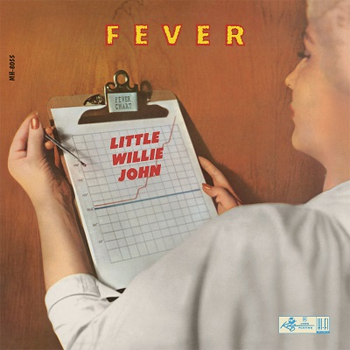 Little Willie John’s time in the spotlight was relatively brief; his album-making career on King Records lasted only from 1956 to ‘62. His debut LP, Fever, founding him roaring out of the gate: a dozen songs, all killer, no filler. Albums weren’t the primary musical format in ‘56, so Fever is to some extent a collection of songs previously released as singles. “Fever” remains his best-known number, but it displays merely one dimension of John’s range and expression. His first solo single, “All Around the World” had been released as both a 45 and a shellac 78 in July 1955, and – as the liner notes on this replica sleeve remind us – the single moved nearly a third of a million copies.

There’s a deep blues foundation to the songs on this collection, but they’re delivered in a style that transcends that genre, just as Ray Charles’ music could never be confined to one style. There are romantic weepers (“Suffering with the Blues”) and uptempo R&B numbers (“I’m Sticking with You Baby”) and an unaccredited duet (“Dinner Date,” humorously credited on the single to “Little Willie John and His Girl Friend”).

“Grits ain’t groceries” is one of several immortal phrases found in “All Around the World.” In fact plenty of people likely thought that was the name of the tune. No matter; it’s a fantastic number that is in the grand tradition of jump blues, the under-appreciated variant of music that hews quite close to rock ‘n’ roll. In fact one can easily consider this music rock ‘n’ roll. Whatever you call it, Fever is every bit as essential as Here’s Little Richard, released a year later.

Modern Harmonic’s reissue – available June 22 – duplicates the original sleeve in most every way, right down to the “you may also enjoy” suggestions on the back of the jacket. The record itself, however, is 180-gram vinyl (white with streaks of yellow), in glorious back-to-mono and sporting the original King center label.

Nota bene: There is perhaps no better companion to this record than Susan Whitall’s biography of Little Willie John. And my interview with the author makes good reading, too.