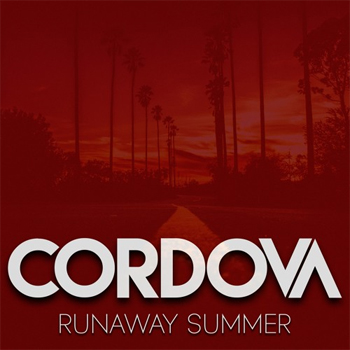 The heavy chunka-chunka guitars and scream that kick off “Hiding” tip off the listener that Runaway Summer is going to be a growling, black metal extravaganza. But the tricky meter and pummeling yet precise drum work – even in those first few seconds – suggests something perhaps more nuanced. And when the vocals come in (though the heaviness remains) it’s clear that there’s more gong on here than expected:the song’s feel is closer to the hardest of hard rock than any kind of Scandinavian death music.

The vocals are clear and out front, and there are event bits of vocal harmony. With interesting (if despairing) lyrics, Cordova reveals itself to have some very melodic ideas; it’s simply that the band chooses the couch those ideas (on this cut, at least) in an ambitious arrangement. There are hints of The Incident-era Porcupine Tree, but then a bridge heads in an almost AOR direction. The band is all over the place stylistically, all in the course of a three-minute song But somehow it works.

The three remaining tracks on Runaway Summer show that “Hiding” is something of a red herring: the New Mexico-based bad’s overall musical approach is less metallic and more mainstream rock. And that’s fine: the songs are strong, the vocals are emotive and effectively delivered, and the band is tight. The title track is a modern version of swaggering 1970s arena rock.

“Trigger Happy” combines an almost pop sort of guitar figure with a heavy, ‘90s grunge aesthetic; the combined effect draws from the best of both styles. Cordova’s economy of songwriting – none of the four concise songs on the EP even threatens to wear out its welcome – is among its strengths. The EP closes with “Weighted,” another example of the successful marrying of styles that makes Runaway Summer a worthwhile listen. By definition, an EP is short on content, but the band promises multiple releases to follow in 2018.