Album Review: In the Light of Led Zeppelin — Pompeii Sessions 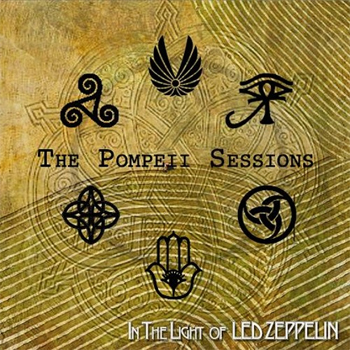 Musical tributes are a dodgy proposition. At their worst, they betray the performer’s lack of originality. But at their best — a rare occurrence indeed — they do what all good art does: provide an effective means of creative expression by building upon the works (influences, one could say) of those who have come before.

There have been (and remain) countless tribute acts covering the music of Led Zeppelin. But a group calling itself In the Light of Led Zeppelin takes a somewhat novel approach that makes it slightly more interesting than most. Instead of basing its approach upon recreating the sound and texture of Led Zeppelin in its prime, the group instead bases its arrangements on what it believes Robert Plant and Jimmy Page might have done had they continued their 1990s collaborations.

In practice, that means that there’s pointedly more of an Eastern flavor to the group’s arrangements. And it also influences In the Light’s selection of material. You won’t find “Rock and Roll” on Pompeii Sessions; instead, the song selection leans heavily toward Zep’s mid-period, highlighted by Houses of the Holy (1973) and Physical Graffiti (1975). In place of the orchestration on the original “Kashmir,” In the Light focuses on the violin, giving it a very Northern African texture. The guitars drone nicely under the fiddle solo, and keyboards are use sparingly, if at all.

The tribute band’s readings do often rock, though. “Dancing Days” is note-perfect, but displays little in the way of sonic innovation or originality; instead it falls prey to the by-definition familiarity of the material. Some tasty violin charts add a subtle difference, but in the end the cover is just that: a cover.

“The Rain Song” is among Led Zeppelin’s most distinctive tunes; much of that effect comes form Jimmy Page’s open-tuned guitar and John Paul Jones’ deeply expressive Mellotron work. In the Light follows the guitar arrangement, but substitutes fiddle for the soaring Mellotron. In doing so the group lends some of its own character to the reading, but as nice (if a tad too understated) the violin is, the approach robs “The Rain Song” of much of of its transcendent sonic majesty.

In the end, In the Light is caught between the same rock vs. hard place in which most every tribute act finds itself: slavish reproduction earns brickbats, but too much originality and one risks losing what was special about the original. In the Light of Led Zeppelin does as good a job navigating that path as any, but the results inevitably remain mixed.

Tags:in the light of led zeppelin