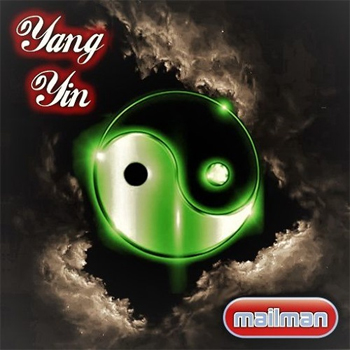 The concept of duality is a popular one in literature and the arts; West Sussex, England-based recording artist Mailman (known at home as Jamie Stanley or “Stan”) explores the subject on his latest release, Yang Yin. The idea is simple: a full life is neither all light nor complete darkness; it’s bits of both. In fact both are necessary, and only when true balance is achieved – by acknowledging and embracing both – can one live fully.

Of course that can sound a bit head and philosophical, and this is a rock album, after all. But with Yang Yin, Mailman has crafted an album of melodic, vaguely progressive (but not intimidatingly progressive) songs that can be enjoyed even if the underlying theme isn’t taken into consideration.

In fact, using a clever gambit, Mailman provides two handy playlists of the album on his Soundcloud page. One starts with the “Light Side,” while the other sequences the “Dark Side” first. I give a slight nod to the sequence that puts lightness first. The songs are well-constructed; the arrangements are never cluttered. Mailman’s songs have a strong melodic quotient, and while most of the songs are mid-tempo rockers, each has a strong hook upon which the entire tune is developed. Some listeners will detect hints of Pink Floyd in tunes like “Frontiers,” but the overall vibe of Yang Yin is a bit less doomy and melancholy that that reference might suggest.

Stanley’s voice soars above the clean and catchy arrangements; even on the uncharacteristically peppy “Owe it to My Heart” (which sounds a bit like prime-era Electric Light Orchestra minus the extra instrumentation) there’s a unified vibe that holds the album’s 20 songs together nicely.

Tuneful pop-rock with an emphasis on songcraft is the hallmark of Mailman’s Yin Yang. Listener who require a bit of grit in their music might find the album – especially the “Light Side” a bit too friendly and upbeat, but most listeners who appreciate a memorable tune will find plenty to enjoy on this set.