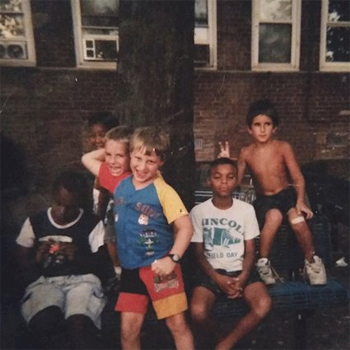 Back in my day, EP was the designation for an extended play 45rpm record. In this context” extended” meant that the record had more than the standard two songs. Usually there were four, as on The Beatles (No. 1), released in November 1963. Clearly things changed while I wasn’t paying attention, because Ferentz and the Felons’ Hudson County EP contains but two songs.

The title track (and/or a-side, if you prefer) starts off with an insistent, two-chord acoustic guitar figure that recalls Pink Floyd’s Animals. But once Zak Ferentz’s vocal kickc in, it’s clear that things are headed in a very different direction. The band’s sound has hints of heartland rock, a poetry-set-to-music vibe that suggests some of Bruce Springsteen’s more durable work. The insistent snare drum that propels the song through its verses gives “Hudson County” a martial feel, and while Ferentz’s singing isn’t the most distinctive, it’s possessed of authentic character that conveys sincerity. When he sings “Hudson County, I’m leaving you,” the listener will pick up on the pathos, regret and resignation that’s woven into the song’s lyric. The song doesn’t really develop much past that, but perhaps it doesn’t really need to.

The flip is “Ash Moon,” and it kicks off with a memorable lead guitar line. The insistent nature of “Hudson County” is present here as well, suggesting that’s Ferentz and the Felons’ trademark. But listeners have only these two songs to judge by, it’s impossible to know for sure. Musically, “Ash Moon” is the superior of the two tracks on the EP, and it’s perhaps an indication of where Ferentz should be placed on the musical landscape that his Spotify page also suggests listeners might enjoy tunes from Tom Petty, Bob Dylan and Neil Young. More time – and certainly more musical output – will be required to measure whether Ferentz and the Felons deserve mention in such rarefied company.