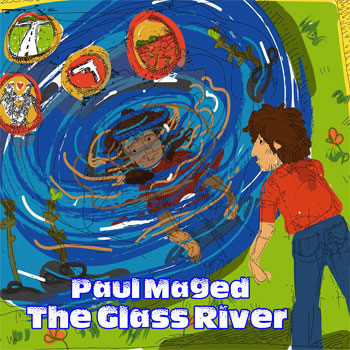 Alterna-rocker Paul Maged has been making albums for more than a decade now; his latest is a six-song EP called The Glass River.

The songs vary widely: opening track “Gunz 4 Hire” is a near-manic rock tune, with shouted vocal choruses and wailing police sirens, all taken at a breakneck pace not unlike punk, but with more of a conventional rock sensibility.

The playfully-titled “Corporate Hell (The Legend of Tooly McDouche)” has a stagey, theatrical feel not unlike Jim Steinman’s work for Meat Loaf, complete with decidedly NSFW lyrics. “Choices” slows things down for “Choices,” a ballad vaguely reminiscent of Dennis DeYoung-era Styx. The EP’s title track (subtitled “The Ballad of Alan and Jane”) is the most musically appealing track on The Glass River. All of Maged’s musical virtues are on display here, and he reins in some of the more self-indulgent tendencies that characterize the first three tracks.

“For the Sea” is a pretty piano ballad, with somewhat mannered vocals. The song’s arrangement folds in additional instrumentation as it unfolds; the melody is strong enough on its own, but Maged’s lyrics make the song: set in the (near) future, “For the Sea” describes environmental disaster, and features the sound of crashing waves and screeching seagulls to make its point even more overt.

The Glass River ends somewhat oddly, with a brief track called “Life Goes By Prelude.” It’s a promising enough tune, but it feels underdeveloped, as if it should be placed at the beginning of a larger work. Overall, The Glass River has its moments, but feels a bit like the rush-released part of a full album. If that is the case, the tracks here will be worth re-assessment in that larger context.