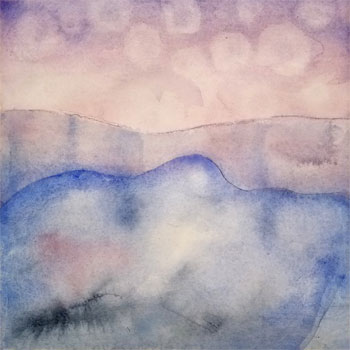 Picture this scene in your mind’s eye: a desolate, windswept landscape, mostly monochromatic and largely devoid of detail, yet with ominous pockets of darkness that suggest an unknown danger lurking just out of sight. What might the soundtrack for that scene be? Ryan Summers’ ii provides one possible answer.

A collection of synthesizer-based instrumentals, ii takes the listener on a sonic journey though Summers’ world, one populated (or so the song titles would suggest) by elephants, shapeless forms, “Hypnotic Drones” and “Murky Depths.” Those evocative titles do indeed telegraph the ambience of each of the ten cuts on ii.

Fans of Tangerine Dream will find themselves in warmly (well, perhaps icily is a more apt adverb) familiar territory on cuts like “Sci-Fi Sequence” and “From the Coneflower.” There’s more than a hint of loneliness and melancholy within the grooves on shimmering, contemplative cuts like “Transactive Memory Partner,” but if this is what melancholy sounds like, maybe it’s not such a bad feeling after all.

Summers’ minimalist yet expressive electronic instrumentation often suggests instruments that aren’t there; some of the textures on “Transactive Memory Partner” are evocative of a highly distorted electric guitar, an instrument that is wholly absent on ii. And despite the very analog character of the album, in actuality ii was created using “soft synths” (computer-based software), with Summers’ only concession to the old-school production aesthetic being a real-life custom-built metal reverb plate through which he processed many of the album’s sounds.

However he did it, with ii Ryan Summers has crafted an intriguing and meditative work.