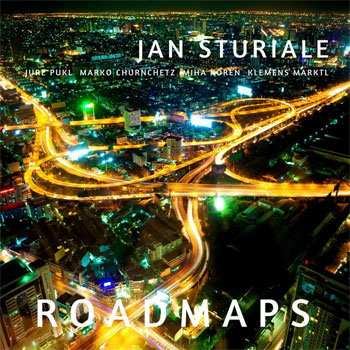 A classically-trained guitarist, Jan Sturiale expertly treads the fine line between tasty guitar instrumentals and ensemble jazz. On Roadmaps, the fourth album by the Italian guitarist/composer, there’s a wide-angle focus to the music. In practical terms, that means Sturiale is quite content to cede lead spots to his fellow musicians. As such, Roadmaps avoids being a guitar showcase. Instead it’s a smoldering yet dazzling instrumental excursion that places emphasis on the interplay between the musicians.

The overall sonic texture of Roadmaps is smooth, but certainly not to the degree of becoming the most dreaded of all musical forms – smooth jazz. No, there’s a sinewy approach to the melodies, but that approach is couched in a warm and non-abrasive framework. Sturiale spins out buttery solo lines on tracks like “The E Song,” but even then he engages in musical dialogue with saxophonist Jure Pukl.

The album’s rhythm section (drummer Klemens Marktl and Miha Koren on bass) is superbly tight, but with just enough splashy groove to imbue a decidedly human touch to the session. And though his work is often understated – doubling the lines of Pukl or Sturiale – keyboardist Marko Churnchetz deserves special mention. (Churnchetz get his well-deserved spotlight on the title track.)

Though the musician credits could lead some to guess otherwise, Roadmaps was recorded and mixed in Brooklyn. The recipient of a Gary Burton Scholarship, Sturiale studied at Berklee a Gary Burton Scholarship to Berklee, and his bands live sets display that wide-encompassing approach to music, with occasional covers from the works of Peter Gabriel and Frank Zappa.