Today I take a look at four simply superb reissue/compilations, all on vinyl. 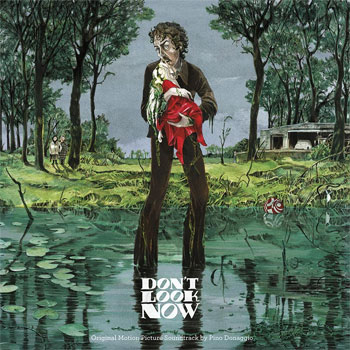 Don’t Look Now Original Soundtrack (Waxworks)
Don’t Look Now was a 1973 thriller starring Donald Sutherland and Julie Christie, two of the era’s hottest actors. The film, directed by Nicolas Roeg (The Man Who Fell to Earth) is based on Daphne du Maurier’s short story; the author was on record saying that Roeg’s film was one of the few screen adaptations of her work she enjoyed. The film’s score was composed and performed by Venice-based Pino Donaggio, an Italian pop singer who had never before scored a motion picture. The experience of making music for Don’t Look Now was so successful that Donaggio went on to score literally dozens more films – most but not exclusively thrillers – including Dressed to Kill and Seed of Chucky. The score’s suites include solo pieces for piano and organ as well as some deeply evocative (as in, “ooh, scary!”) orchestrations featuring string and woodwinds. Some chamber-style pieces feature piano, flute and acoustic guitar; they’re lovely and do exactly what film music is supposed to do: evoke a set of emotions, but don’t leave too strong an aftertaste lest it impact what follows. The most stirring piece is the heavily orchestrated and malevolent “Strange Happenings” (part of the second of three suites). The lighter-than-air “John’s Theme” is quite pretty, especially in contrast to the rest of the material here. The faux-classical “John’s Vision” could pass for a 19th century orchestral piece. Overall, the music – which, it should be noted, was never designed to stand on its own – is quite effective. Waxwork’s 180-gram release includes color vinyl, gatefold sleeve and an 11×11 art print. 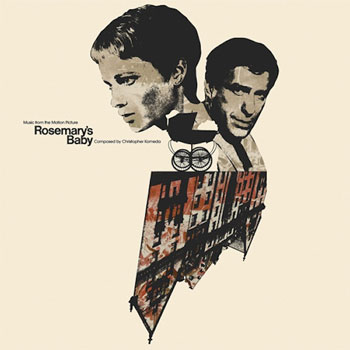 Rosemary’s Baby Original Soundtrack (Waxworks)
There’s creepy, and there’s fake, borderline-creepy. Removed from the context of its (decidedly creepy) film, Christopher Komeda’s soundtrack for the 1968 horror film Rosemary’s Baby feels like the latter. The main title features a strong enough melody, but the vocal is nothing more than an endlessly la-la-la-ing female vocal that wears out its welcome quickly. And while it makes perfect sense within the context of a motion picture to rely upon recurring musical themes for most of the compositions, as a listening experience it feel repetitive. Still, as a standalone experience, the soundtrack has its moments. “Chanting” is quite unnerving, and the high-pitched vocal wailing that punctuates some of the instrumental tracks is downright spine-tingling. Some of the scoring echoes Bernard Herrmann’s work for Alfred Hitchcock, though it adds some slightly obvious musical tropes into the mix. The tunes that accompany the less-scary parts of the film are a delight, as well, conjuring fleeting moments of joy and contentment, yet retaining just enough sinister edge to let the viewer (listener) know that evil lurks yet ahead. Sadly, Komeda would die from injuries sustained in a freak accident, cutting his career short only a year after Rosemary’s Baby was released. The 180-gram vinyl reissue features a gatefold sleeve, film stills, a poster and transparent/translucent “splatter” vinyl. 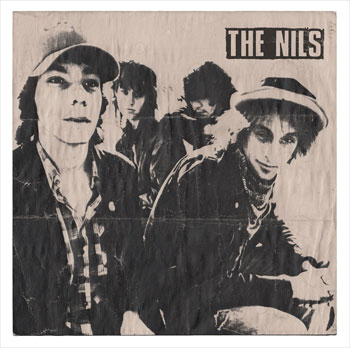 The Nils – The Nils (Label Obscura)
The history books – well, Wikipedia – describe the Nils as a punk rock band. Your ears may tell you otherwise: though they had been together quite awhile by the time of its making, the Montreal group’s self-titled 1987 LP sounds more like muscular powerpop than anything else. The energy of punk is certainly evident, but there’s a pleasing jangle and a knowing sense of songcraft to be found in the ten songs that make up this (formerly) rare album. While the group built a creative head of steam in the 1980s, it fell victim to the bankruptcy of its label. Years later, the group’s leader Alex Soria took his own life (sadly echoing the fate of another underrated group, Badfinger). Though a few tracks feature auxiliary musicians (Chris Spedding, who performed similar duties for the Sex Pistols), The Nils is largely the work of a tight, self-contained unit. The band rocks hard when it wants to, as on blistering rockers like “If Heaven Lies.” Label Obscura has valiantly rescued The Nils from, well, unjust obscurity, and lovers of tuneful rock would do well to seek it out. The reissue is on plain old (heavyweight) black vinyl, but the gatefold sleeve includes lots of archival photos and and insert includes an excellent interview that fills in blanks and contextualizes the release. 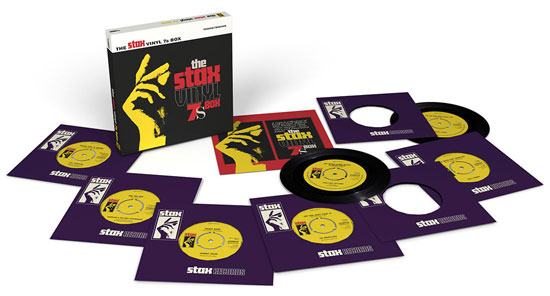 Various – The Stax Vinyl 7s Box (Concord)
Over the last decade or so, Concord Music has done an admirable job of reviving the venerable defunct Stax label, in the process shining a light on some forgotten (and sometimes hardly-heard) soul music from the 1960s and early ’70s. This latest offering is clearly aimed at collectors, or at least those with a turntable. The boxed set does in fact include seven records, each with one artist on each side (fourteen in all, natch). Also included is a brief yet excellent color booklet that provides brief profiles of the featured acts. The focus here is on the lesser-known artists signed to the label, including John Gary Williams, J.J. Barnes, Margie Joseph, the Montclairs, Lou Bond, Roz Ryan, Darrell Banks, Paul Thompson, Joni Wilson and Charlene & the Soul Serenaders. A few better-known artists are included (Johnnie Taylor, William Bell, Barbara Lewis, Carla Thomas), but the tunes chosen are never the obvious choices. The overall quality of the music here underscores the fact that despite its troubles, Stax was blessed with an embarrassment of riches talent-wise. The booklet describes the collection as “(a) superb collection of hard-to-find Modern and Northern Soul ‘rare stamps’ from Stax and associated labels.” I’m not sure I could add much to that description. Even if you own all three volumes of the massive Complete Stax/Volt Soul Singles CD collections, having these tunes on the 45rpm format – legally, as the booklet points out – is wonderful indeed. My fave here is Margie Joseph’s “One More chance” but there’s nary a duff tune in the bunch.