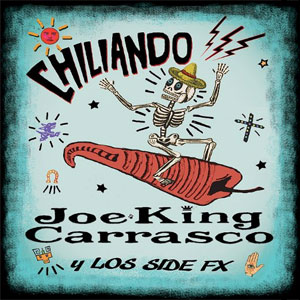 Those listeners who dug deeper than the commercial pap foisted upon us by Top 40 radio in the 1980s discovered something called college rock (also known as alternative rock). The kinds of music made – intentionally or not – under that umbrella varied widely, from hard rock to synthy sounds to proto-Americana to the “Paisley Underground” scene, and many others. But what most all of it had in common was a greater sense of authenticity, and of immediacy.

One of the acts those-who-were-there might recall is Joe “King” Carrasco and the Crowns. Theirs was a kind of new wave-y update of the sounds popularized by Doug Sahm and the Sir Douglas Quintet. Carrasco was a brief (and minor) sensation on MTV, with both “Party Weekend” and the less novelty-flavored “Buena.” Good tunes both, and the 1980/81 LP Joe King Carrasco & the Crowns is a fun artifact of its era. But the deluge of good “alternative” music in those days, coupled with the on-to-the-next-thing ethos of MTV, meant that Carrasco’s moment in the spotlight was brief.

So you may be as surprised as I was to learn that Carrasco (real name Joseph Charles Teutsch) has continued to release a steady stream of albums – more than two dozen(!) to date – and that the guitarist, now based in Puerto Vallarta, Mexico, has released hs latest, Chiliando, with his current band, Los Side FX.

The Tex-Mex flavor of Carrasco’s early material is still there: “No Way José” sounds not a thousand miles away from War‘s “Cisco Kid.” But the album’s overall flavor is far closer to early 1970s Rolling Stones. “Anytime You Need Me” could be a track from the Exile on Main Street sessions, right down to the wailing female backing vocals.

The party vibe is firmly in place on cowbell-heavy tunes like “Tequila Revolution,” numbers that all but force the unsuspecting listener to sing (or shout) along. The band is on that sharp edge between loose and tight, which is to say they’re exactly where they should be. The title track has a flavor quite like Santana‘s “Smooth,” though it feels a bit more – as suggested at the beginning of this review – authentic.

Carrasco is eminently likable on Chiliando; he’s wholly void of pretense, but unafraid to deliver solid musicianship in the guise of a party record. Those who want tasty guitar licks will find plenty to enjoy in the disc’s dozen tunes. Listeners who want a solid, rocking groove will be satisfied. And those who just want a turn-it-up party disc will find their needs fulfilled with Chiliando. Fun start to finish, and a good reminder that just because you haven’t heard what a given artist has been up to for decades doesn’t mean that his new stuff isn’t worthy of investigation. Recommended.