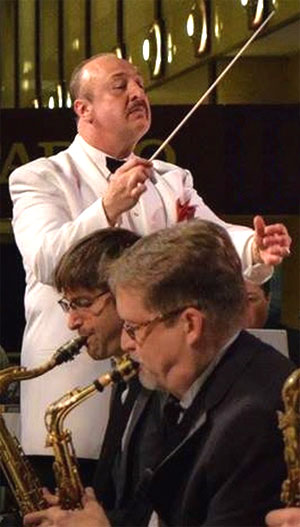 On February 12, 1924, jazz bandleader Paul Whiteman staged a concert at New York City’s famed Aeolian Hall. That event, billed as An Experiment in Modern Music, featured George Gershwin‘s premiere performance of “Rhapsody in Blue.” Whiteman (sometimes called the King of Jazz) would go on to stage many more concerts in the Experiment series, and the shows would become an important part of jazz history in the United States. Now in 2016, Asheville, North Carolina’s Godfather of Jazz, Russ Wilson is mounting a similar concert series that he calls Russ Wilson’s History of Jazz. The year-long Sunday evening series at ISIS Restaurant & Music Hall kicked off with a January 3 set, and will continue every month through the end of this year.

Pausing for a moment between three back-to-back gigs within the space of 24 hours, Wilson explains the idea behind the concert series. “Almost every style of jazz is being played” here in Asheville, he observes. He goes on to list some of the many jazz ensembles currently playing in and around town. This city of under 100,000 people is host to no less than three larger-scale jazz groups, he says. “There’s my orchestra, there’s the Asheville Jazz Orchestra, there’s Steve Alford’s Rational Discourse. That’s three fabulous big bands just in Asheville!” Wilson is also putting together yet another big band, the Euphonic Ragtime Orchestra, specifically for the series’ February 7 show.

“So I thought, okay,” Wilson says, “since we’ve got all these styles of jazz being played, why don’t we take that and feature all the local talent? Let’s show the people that we can do this chronological history of jazz.” He notes that the twelve-plus concerts in this 2016 History of Jazz series will exclusively feature WNC musicians. “There are no national acts, no ‘headline’ names” on the bill, he says. Taken as a whole, the series will guide audiences through the developments in jazz, from pre-jazz gospel vocal to Dixieland to swing, bop, and many other styles.

“There is such a cool, eclectic, vibrant jazz scene going on” in Asheville, Wilson says. “You would expect something like this, maybe, in Charlotte. But it’s not happening there; it’s happening here.” He notes that out-of-town visitors at his shows tell him that “there’s not a jazz scene like this unless you go to somewhere like New York.” 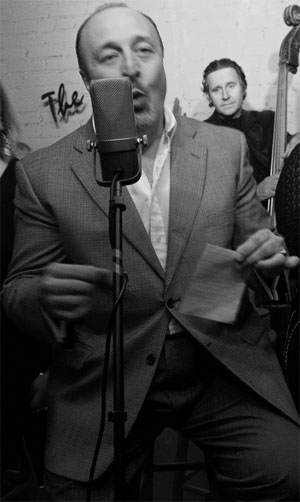 Wilson put the word out about his plans, and was met by enthusiastic buy-in from Asheville’s community of jazz musicians. He even worked the series schedule around so that busy players – who often book engagements far in advance – could be accommodated. “We may add a couple more dates,” he says, “but for the most part, the calendar is set.” The series’ website (www.rwhoj.com) lists the details of the series, and will also offer links to other jazz events at Barley’s Taproom, Grove Park Inn, and other local venues.

While most of the shows in Russ Wilson’s History of Jazz will take place at ISIS (variously upstairs and downstairs, depending on the size of the act), plans are underway for a special November 12 show at the Diana Wortham Theatre, titled “Russ Wilson’s Experiment in Modern Music.” Taking the baton from Whiteman’s concerts of nearly a century ago, this show will feature the premieres of five orchestral jazz works, commissioned specially for the event. Local composers Richard Shulman, Michael Jefry Stevens, Henry Westmoreland (aka Hank West), Alan Theisen, and Ben Hovey will each contribute new works. Connecting back to the 1924 event, the show will also feature a performance of “Rhapsody in Blue.” The Diana Wortham event is contingent on acquiring funding. “I’m talking to grant writers, and I may do a crowd funding campaign, but I would love to find a sponsor,” Wilson says.

The longtime Asheville resident (and Hendersonville native) feels that the time is right – both for himself and Asheville – for a concert series such as this. “I’ve gotten to the point of running my own business, Wilson Music Company, and running twelve bands of my own. This [concert series] is the biggest thing I’ve tackled so far. And I’m ready. And if I don’t do it, who will?” Wilson believes that Asheville “always has been a kind of bohemian community, one full of music lovers.” He notes that while other cities have had their own music scenes, “right now it’s Asheville’s turn. And I think it’s going to be so for quite awhile.” He quotes his friend and musical associate Hank Bones: “We’re in the golden age of music gigs here in Asheville,” but takes mild issue with that assertion. “I don’t think we’ve even seen [that golden age] yet,” he says.

“My father was not a musician,” Wilson continues. “He worked for American Enka over here in Candler [for years the largest rayon manufacturer in the USA, located just outside Asheville NC]. He was a troubleshooter, an electrician. He worked on all those big machines. He was a voracious reader, and got Reader’s Digest in the mail every month for years. And he bought every one of their cussed box sets!” Wilson notes that long before Time-Life started doing it, Reader’s Digest put together compilation box sets of music on vinyl records. 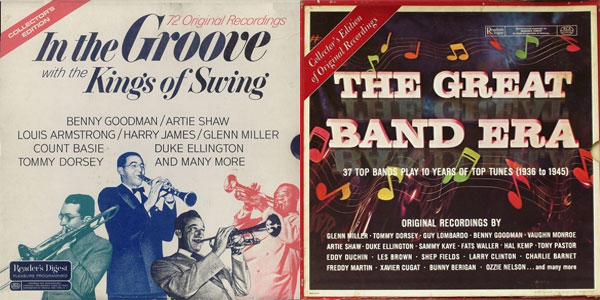 There were two of those sets in the elder Wilson’s home record collection that would have a major influence upon young Russ. “One was called In the Groove with the Kings of Swing, and the other was The Great Band Era.” Wilson chuckles, “I grew up a child of the 80s. But when everybody else was listening to DEVO, early Madonna, and Blondie, I was listening to Benny Goodman, Fats Waller, Paul Whiteman…all that stuff. That’s what I cut my teeth on.” And he believes that his lifetime of immersion into the American musical form positions him ideally to mount Russ Wilson’s History of Jazz.

“I get to do what I love, and I get paid for it!” he smiles. “Before I went on the road, I had started the Wilson Music Company, but I never got it fully off the ground. I toured with bands for years. I toured with [bluesman] Jimmy Thackery for two and a half years; that was my last tour of duty, and ended November 2010. When I came off the road, I hit the ground running [locally], and I haven’t stopped since.” 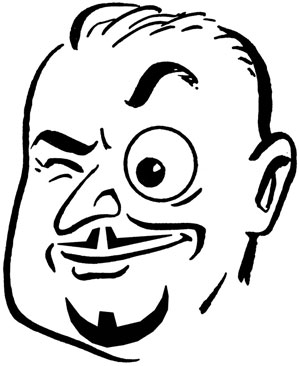 Wilson’s concert series is an ambitious undertaking, involving booking space and working with the schedules (and temperaments) of dozens of musicians. “People tell me I’m one of the hardest-working people in show business,” Wilson smiles. “I tell ’em, ‘I’ve got a mortgage, a car payment, and a wife!’ But honestly, I wouldn’t have it any other way. This is what I do.” Wilson will emcee all of the concerts, and will perform at several of the dates.

Attending Russ Wilson’s History of Jazz, “You’ll get a little bit of a history lesson along with being entertained,” Wilson says, while admitting that the concerts won’t explore “every single detailed genre of jazz.” But then there’s always next year – and beyond – for those.