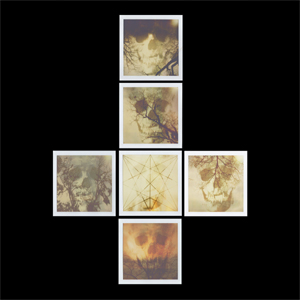 With its transgressive album cover – photos arranged in an upside-down crucifix style, featuring spooky overlays of grinning skulls – you’d be forgive for guessing that Ancient River‘s Keeper of the Dawn is some kind of black metal album. But it’s not. What we have here is dream, gauzy, minor-key rock of a decidedly late 60s psychedelic style. The ten songs all feature hypnotic melodies atop simple chord patterns, whispered vocals, and gentle organs, along with subtle picking at heavily reverberating electric guitars. It’s all very evocative stuff.

The songs don’t really unfold or develop in a meaningful way, but that’s not the point. There’s plenty of drama in the instrumentation and arrangement as it is, most notably on the title track. Some of the pieces – take “New Rising” – are mere sketches of songs. Others have more character, such as the dark, Byrds-in-a-spaghetti-western “Mother of Light,” quite possibly the most fully realized track on Keeper of the Dawn. 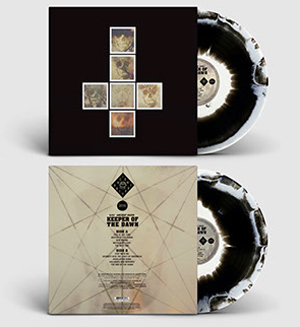 Vocals are used as a textural element on the excellent “Stay With Me,” another track with a fetching melodic line and some very Nick Mason-y drum fills. Some tracks – “New Rising,” “The Next One,” and “Hallways and Mirrors” serve mainly as atmospheric link tracks, but arguably they’re the glue that holds the album together as a whole.

The disc closes with Keeper of the Dawn‘s longest track, “End of the Dawn.” The track develops slowly, and is a tidy distillation of all of Ancient River’s virtues into a singe track. The fake ending (a la The Beatles‘ “Strawberry Fields Forever”) is a nice touch. The limited edition vinyl release features stunning two-tone splatter pattern.