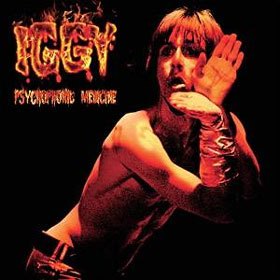 File next to: New York Dolls, The Stooges

If you made a list of the most unsentimental rock acts, Iggy Pop would be near the top of the list. Right? He never looked back, always charted his own unique, peanut-butter-and-glass-coated path, right? Well, apparently not. As this 2CD set illustrates, James Newell Osterberg acknowledged his roots, if only on recordings clearly not planned for official release. Across 21 tracks drawn from sessions and live dates in 1981 and 1985, he pays bizarre tribute to The Animals (or perhaps David Johansen?), Robert Plant‘s Honeydrippers, Jimi Hendrix, and his old band, (the 1960s version of) The Stooges. The tracks are outtakes from his critically-shellacked 1981 commercial bid Party; sessions produced by Sex Pistols guitarist Steve Jones; and a live date in San Francisco. Strange even by Iggy standards, this set seems to collect his most ill-advised efforts. That it still doesn’t (totally) suck is a testament to his importance, I guess.