Album Review: Gong – I See You 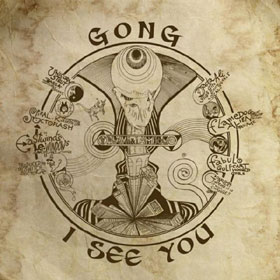 Daevid Allen departed this temporal plane a last week. The music legend was best known as one of the founding members of Soft Machine, Canterbury England jazz/rock heroes. To continental fans, he was equally revered for founding and maintaining Gong, the (more or less) French hippie collective. (Oddly enough, Allen was neither British nor French; he was born in Melbourne, Australia.)

Neither of those groups was what most would call mainstream. Their approaches folded in elements of free jazz, space rock, and other styles that lay at the margin of the commercial spectrum. But both were capable of some deeply experimental and exciting work that sometimes made small moves in the direction of mass appeal.

Allen bowed out of involvement with Gong in the mid 1970s, choosing instead to work on other projects; the band continued (and continues) billed as Pierre Moerlen’s Gong. But around 2000, Allen reactivated his own Gong lineup. 2014’s I See You would be the final album form the gorup, as by its release, it was clear that Allen’s medical condition was terminal. But fortunately, – and though he didn’t even get the six months he though he had remaining, I See you shows Allen and band still making the music they wanted to, on their own terms.

“Occupy” sounds a lot like the more manic moments of King Crimson‘s “21st Century Schizoid Man,” but beyond that, on I See You, Gong sound like…Gong. Flutes and saxes (courtesy of Ian East) flutter in and out of the mix, while Allen’s vocals share the out-front space with guitar work from Kavus Torabi and Favio Golfetti (Gong has always been an international affair).

There’s an overall feel on I See You that’s halfway been hypnotic and unsettling. Once its spoken intro is out of the way, “The Eternal Wheel Spins” feels like a cross between Hawkwind and Ozric Tentacles (the latter of whom were most certainly influenced by Gong).

The odd thing about Gong as showcased on I See You is that though they’ve always had a predilection for jazz-flavored, jammy space rock, there is a sense of – dare I say – discipline at work in the crafting of these tunes. Without compromising the weird ‘n’ wooly Gong vibe, Daevid Allen and his band mates created one of the most appealingly accessible works in Gong’s catalog. The free-wheeling sense that one can find in live albums of this sort of music is wholly in place, yet with the structure and tight editing that one usually find only in studio albums.

Don’t get me wrong: there’s plenty of off-the-wall strangeness on I See You: the opening sounds of “Syllabub” are deeply weird, as is the track itself, which may remind some listeners of early Kevin Ayers (yet another Gong-related figure of legendary reputation). Gong’s publicist seems to think “’Syllabub’ sounds like a hit song,” but I’m wondering in what solar system that could be the case. Not the one in which Earth resides, I should think. And that’s all to the good: if Gong got too accessible, they’d doubtless lose much of what constitutes their appeal. That said, I See You shows us an uncharacteristically accessible side of the band. That’s no small feat for a group led by a 75-year-old man with terminal cancer.

Daevid Allen delivers a soliloquy of sorts with “This Revolution” a sort of modern-day follow-on to Gil Scott-Heron‘s “The Revolution Will Not Be Televised.” The spoken word track may also be something of a farewell message from Allen. In light of his passing, it sounds bittersweet yet hopeful. “Zion My T-shirt” may have an inscrutable title and vocals, but its opening is reminiscent of the Mapuga tribe vocals on the somewhat obscure Pink Floyd tune “Absolutely Curtains.” And the playful “Pixielation” suggests what McDonald & Giles might have sounded like with Donovan on lead vocals.

Anyone who enjoys the work of, say, Steve Hillage (still another Gong associate) will find a lot to enjoy in I See You. And as the last recorded musical statement from Daevid Allen (just listen to “Thank You”), it’s both a fitting work to cap an intriguing career and a fine place for a Gong novitiate to begin (and then work backward).