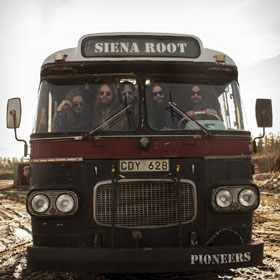 I feel that it’s my duty to take an unusual approach to this review: instead of some sort of contextual introduction, I’m going to go directly to my main thesis. Here it is. Ready?

There it is. And I’m not talking Book of Taliesyn Deep Purple; no, Siena Root has the Machine Head / Who Do We Think We Are / Burn / Made in Japan sound down pat. From the husky, assured rock’n’roar of Jonas “Joe Nash” Ahlén‘s lead vocal, to the swirling, assertive, leading-the-pack organ pyrotechnics of Erik “Errika” Petersson to the fiery yet lean-and-mean fretwork of lead guitarist Matte Gustafson (whose ability to conjure Blackmore-styled riffage is nothing short of uncanny), this group succinctly and superbly nails the early 70s vibe of one of rock’s most popular hard rock outfits.

But that’s not the most important thing about Siena Root. No: putting together a band that sounds like it includes Ian Gillan, Jon Lord and Ritchie Blackmore isn’t (in and of itself) all that remarkable; Deep Purple did it for a few years, after all. What makes Siena Root special is the music. This five piece from (as you might have guessed from the surnames) Stockholm creates songs with strong hooks, solid, hummable melodic lines, and enough high-octane rock punch to hit the mark squarely.

Siena Root’s lyrics aren’t deathless poetics: their topics range from women who done them wrong (the album’s standout “7 Years”), who-we-are position statements (“Root Rock Pioneers”), and what sounds like “Highway Star” styled space travel (“Spiral Trip”). And when they do cover someone else’s tune, it’s not Blackmore and Co.; it’s the early Led Zeppelin chestnut, “Whole Lotta Love.” But when Siena Root covers Zep, they make it their own: The signature riff that underpins the song is delivered via Hammond organ routed through an extremely overdriven Leslie speaker. 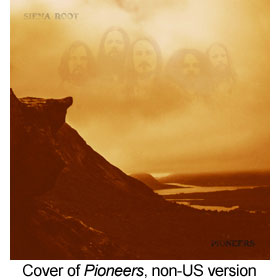 If your idea of a good time includes a fist-in-the-air rock soundtrack a la the early 1970s, but you want something you haven’t heard hundreds of times (no “Smoke on the Water” in Guitar Center, please), then you can’t do much better than Siena Root’s Pioneers.

There are plenty of dynamics with Siena Root’s tunes; they’re not lunkheaded, piledriving rockers. (Or put another way, they don’t look to Status Quo for inspiration.) The musical twists and turns on tracks like “7 Years” make sense, and unfold in a logical way; Siena Root are here to rock you, not impress you with fussy, progressive arrangements. But the shifting gears of that tune’s tempos – driven largely by the rhythm section of bassist Sam Riffer (his real name?) and Love “Billy” Forsberg on drums – add an element vaguely sinister excitement to the proceedings. (They all have long hair and beards, too. Which helps.)

The sticker on the CD case calls Pioneers – the group’s sixth(!) album but their U.S. debut – “stoner rock,” and unapologetically describes it as “a heavy blend of Deep Purple & Iron Butterfly.” As if there could be any other variety of blend. And as if there should be.

So yes, Siena Root are derivative, and they’re unashamed to admit it. But their musical fountainhead is some seriously prime rock that combines the best aspects of heaviosity and melody, and they up the ante with good songs. If you thought Wolfmother‘s first few albums were good and you wished they hadn’t run out of steam, you’ll greet Siena Root’s Pioneers with welcome ears.