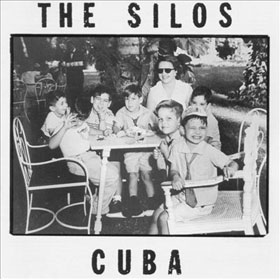 When music historians write or speak about the college-rock music of the 1980s, and when they focus on the country-leaning exponents of that sound, many worthy acts get mentioned. The Long Ryders, The Blasters, Lone Justice, even R.E.M. all get recognized. But too often overlooked are The Silos. Formed in the middle of that decade, The Silos were the musical vehicle for Walter Salas-Humara (formerly of The Vulgar Boatmen) and Bob Rupe. On their second album, 1987’s Cuba, the folky, acoustic-leaning Silos wedded a tuneful sensibility to singer/songwriterly lyrics, and wrapped it all in a genre-spanning sound that took in elements of c&w (notably David Pearlman‘s pedal steel that graces “Margaret”) and alt-folk a la Camper Van Beethoven (for example, Mary Rowell‘s fiddle all over the album).

Rupe and Salas-Humara both sing in a decidedly Southern rock-inflected style, but the tunes on Cuba aren’t beer drinkin’ barn burners; as often as not, the songs concern themselves with marriage, wives, memories and other universal, workaday concerns.

The album blows by in a hurry; the second side rocks harder than the first, kicking off with “Memories,” among the album’s most commercially-oriented tracks. That quality may be related to the full-band (read: electric) arrangement that features the only use of keyboards (guest Rick Wagner on organ) on the entire record.

Cuba is an unassuming record; the songs don’t jump out at the listener. Even the careening and distorted electric guitar squalls on “Just This Morning” are couched in a ramshackle, near-campfire sort of arrangement that keeps the focus on the vocals and lyrics. And a roomful of guests add to what would otherwise be a one-vocal-and-acoustic guitar affair on “Going Round.” With the augmented lineup featuring voices and classical string instrumentation, it’s a thing of beauty.

“It’s Alright” is a wistful number that’s very much in the style of Sid Griffin‘s Long Ryders work; again its lyrics concerns itself with life’s little pleasures. The tune also features Rowell’s most effective violin work on the disc. “All Falls Away” applies the Silos sound to a three-chord rocker; the result feels like a rougher-hewn rethink of Violent Femmes (with much less affected vocals). Taken as a whole the songs on Cuba have much more depth to them than might be initially evident; as such, Cuba is an album that rewards the listener who spends more time with it.

The 2015 reissue of Cuba applies a star black label to a creamy white vinyl LP. A contrasty band poster promoting Cuba is also included; its size and style are evocative of the gig posters of the era. A download card is also included, but I’m quite happy to stick to the vinyl version.