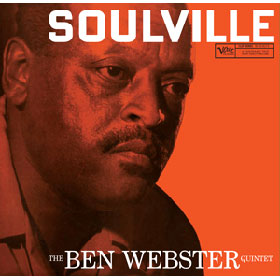 The folks at Vinyl Me Please have struck gold once again. The mail-order subscription label has carved a unique niche in the music marketplace with its carefully-chosen and -curated monthly LP releases, and its latest offering – The Ben Webster Quintet‘s 1957 Soulville – continues the label’s trend of exquisite reissues.

Tenor saxophonist Webster had played with Duke Ellington for many years, but by the time of this album – the fourth under his own name – Webster had made a name for himself as a soloist and bandleader in his own right. With a who’s-who band that featured Oscar Peterson on piano, bassist Ray Brown, Stan Levey on drums, and guitarist Herb Ellis, Soulville is peak Webster. The songs vary from understated, bluesy workouts to more uptempo cuts, and throughout, everyone takes his turn at soloing.

The aptly-named title track is cool and understated, built around a blues framework. “Late Night” is a blues as well, but a much more sexy, uptempo one that swings. The romantic “Time on My Hands” features some exquisitely expressive sax work from Webster. “Where Are You” is skillful, subdued, late-night minimalistic jazz. The familiar “Makin’ Whoopee” is given a suitably playful reading by Webster, with solid support from is band mates.

A 2003 reissue of Soulville (on another label) appended the set with three bonus tracks that featured Webster on (sprightly if loose-limbed) piano; one of those cuts (“Boogie Woogie”) is included on the Vinyl Me Please reissue; other than that, it’s a straight reissue of the original Verve LP. It’s noteworthy (and odd) that the new LP doesn’t have a paper label; instead, the Verve logo and other info that would have been printed is instead tooled directly into the black vinyl.

The heavy-gauge LP comes in a deluxe paper sleeve, and – as with all Vinyl Me Please reissues – includes a poster featuring new artwork, and an overleaf sleeve that features brief notes from VMP’s Tyler Barstow. And as ever, the overleaf includes a recipe for a cocktail that Barstow believes well-matched to the music; in this case it’s a very old-school Gin and Tonic. I can vouch for its successful pairing with Ben Webster’s Soulville.