Book Review: The Clash — The Only Band That Mattered 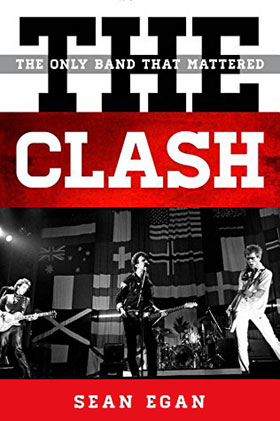 One of the exciting – and at the same time exceedingly frustrating – qualities of modern media is the disappearance of what we might call the gatekeeper. Time was, if you wanted to establish a platform for musical criticism (say, not unlike this blog), you had to go through channels. Those channels included editors and/or publishers who – the story went – would make sure that you possessed some level of skill. The idea was quality control: not just any clown could have a soapbox of his or her own. And it worked. But in the process, the variety of voices was undeniably muted. In practice, the arrangement meant that someone with all the necessary skills, but perhaps having a contrarian, unpopular, and/or heterodox point of view might not be given the means to express him/herself.

Of course the internet has changed that. Anyone with a blog can have a platform, and they can shout their thoughts from the rooftops (in a manner of speaking). The inevitable result of this death of the gatekeeper, however, is that quality control is a thing of the past. If someone makes an unfounded assertion, not only is it archived forever, but – assuming they understand a bit about how search engines work – it’s indexed nearly immediately by Google.

Because of all these new realities, and even though I am most certainly one who benefits from this no-gatekeepers set of circumstances – I still prefer the printed word. Books (and to a lesser extent, magazines) are created, for the most part, with many or most of the old safeguards in place. As such, all other things being the same (in theory at least), printed matter enjoys a higher level of quality control.

And the best example at hand of quality control in musical historical analysis/criticism is a new book, The Clash: The Only Band That Mattered, by Sean Egan. At first glance, at just over 200 pages, Egan’s book might seem to be a slim volume. But because of Egan’s deep understanding of his subject, and his keen, concise analysis, The Clash: The Only Band That Mattered is an important work.

I don’t employ that phrase lightly. Egan’s analysis is so much more than a song-by-song review of The Clash‘s corpus. In a sense it is just that, but what the author does here is to contextualize every song, every EP, every album with not only a full appreciation for who and what The Clash were and what they represented, but Egan contextualizes it all like few other writers could.

Relatively speaking, England is a small country. And while for a very, very long time the sun never set on the British Empire, by the post World War II period, the once mighty Great Britain had fallen on hard times. And while many writers have explored the socioeconomic situations that helped give rise to punk in the 1970s, Egan delves into the topic with the keen insight of a sociologist (which I believe he is not). Egan explores the tension between Britain’s welfare state and the unchecked power of trade unions, and the resulting all-but-stalemate situation in 70s England. And against this richly-woven tapestry of context, his history and analysis of The Clash affords the reader a much, much, much deeper understanding of the band and their music.

Egan is the truest of Clash fans, too, but this fact requires a bit of explaining here. A true fan is the sort who takes the time to understand and appreciate an artist’s work, but s/he is also one who doesn’t blindly applaud and accept everything the artist does. For example, a true Beatles fan is likely to concede (for example) that the group’s reading of “Mr Moonlight” is pretty dreadful; that “You Know My Name (Look Up the Number)” is a mildly entertaining throwaway; that for all its avant-garde bonafides “Revolution 9” remains somewhat unlistenable. And at the same time he or she can still assert that The Beatles are the greatest group of all time.

So it is with Sean Egan and The Clash. The author argues again and again as to the worth of much of The Clash’s music (including many tracks known only to the hardest of hardcore fans), but he is no Clash apologist. He dismisses much of the band’s work as slight, a good deal of it as shallow and opportunistic bandwagon jumping, and some of it as just plain forgettable. As a result of his clear-eyed approach to the band – and with all assertions backed up with plenty of here’s-why-I-say-that detail – his praising of The Clash’s best work is rendered all that much more powerful.

A central theme of The Clash: The Only Band That Mattered is that very early on, Joe Strummer and his bandmates effectively painted themselves into a corner. By staking out nominally pro-proletariat positions (but often quite poorly-thought-out ones), the group limited the directions in which their subsequent lyrical content might go. Their youthful, generally well-meaning pronouncements became difficult to live up to as they became rock stars. The result would be some quite uneven albums. Egan also explores the complicated inner dynamics of the band, including the reasons for Terry Chimes‘ (aka Tory Crimes) departure from the band; his return after Nicky (Topper) Headon was sacked, and – most significantly – the split between Strummer and Mick Jones that resulted in the de facto end of the group. (But even then, Egan goes on to point out a few redeeming qualities about the universally maligned post-Jones, Clash-in-name-only Cut the Crap LP.) Egan concedes early on that Paul Simonon was no great shakes as a bassist, going so far as to point out that on Clash albums, his parts were often played by others. But then the author highlights tracks on which Simonon’s bass work is exemplary and even the best thing about certain Clash cuts.

As rock history/analysis tomes go, The Clash: The Only Band That Mattered is essential reading. For those who don’t especially appreciate The Clash but who would like a better understanding of the society and economy of Margaret Thatcher-era Britain, the book is equally highly recommended.