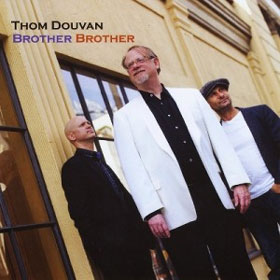 Thom Douvan – Brother Brother
A (perhaps) surprising number of the Detroit players known as The Funk Brothers were actually white guys. One of ’em was guitarist Thom Douvan. In this 2014 album Douvan pays tribute to the team of session players in the form of an album full of cover tunes. Mostly done in a smooth (but not too smooth) jazz style, Brother Brother features readings of classic soul (and/or soulful) tunes from the likes of The Isley Brothers, Hall and Oates, Donny Hathaway and other greats. Imagine if Steely Dan played instro jazz covers, and you’ll have an idea of how this sounds.