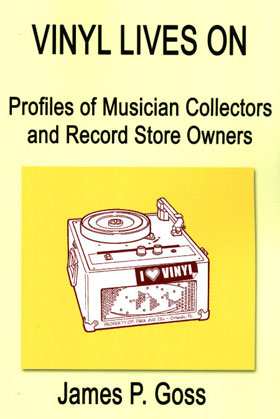 Florida-based author/journalist James Goss digs his vinyl. Though he never writes about his own interests or collection, his abiding fascination with the medium of vinyl records shines through loud and clear in his writing. His first two books on the subject – Vinyl Lives and Vinyl Lives II – offered profiles of many of the more notable independent record shops that have endured through the years and/or popped up in the wake of vinyl’s mini-resurgence. Goss’ knowing questions elicited illuminating responses from the shop owners, and that raw material – deftly combined with his own research and existing knowledge – resulted in some very interesting pieces.

That format is used in Goss’ newest book, Vinyl Lives On: Profiles of Musician Collectors and Record Store Owners. As its title makes plain, this book enjoys a widening of Goss’ scope to include collectors of note. And while a good chunk of Vinyl Lives On still focuses upon indie shops (happily, their number has been growing since publication of Goss’ earlier books), the chapters devoted to profiles of collectors provide a balance and an added level of insight.

Goss’ interview/profile of Henry Rollins is in itself worth the price of admission. Rollins is an unfailingly rewarding interview subject, and Goss’ experience was clearly no exception. The subject of record collecting clearly stuck a chord with Rollins; his numerous quotes are unceasingly interesting, shedding light on his voracious appetite for music (and other recorded material) across a wide array of genres.

Some of the author’s profiles of other collectors are marginally less interesting, but that has as much to do with what they have to say (or don’t have to say) as anything else. Goss’ chapters on Bill Frisell and Billy Vera both focus more on overall biographies of the musicians, so their interest in vinyl represents a smaller part of the content.

Not to focus too greatly on form versus content, but two points deserve mention here. First, Goss’ series of books – though published under the imprint of Aventine Press – are for all intents and purposes self-published works. This does show through in the relatively simple cover art and (to my mind, anyway) questionable choices of font and type size. But those issues are largely matters of taste, and don’t appreciably affect the quality of the books one way or another.

The second point is more substantial. Though Vinyl Lives On and its predecessors aren’t published by a major or well-known house, Goss’ books have obviously received a much more thorough editing than is the norm these days. I’ve read innumerable books these last few years, and am relentlessly barraged with syntax errors, factual mistakes, poor and inconsistent spelling. Goss’ comparatively humble books have virtually none of these issues: they’re well-written and expertly edited. For a writer/editor, reading works filled with mistakes can be an especially distracting experience. With Vinyl Lives On and its earlier two volumes, readers are free to focus on the content, well-presented as it should be.

James Goss’ Vinyl Lives On makes it three-in-a-row for my recommendation.