Album Review: The Mojo Gurus — Who Asked Ya? 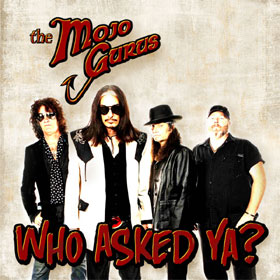 Once upon a time, rock was rock. In the days before popular music fell prey to market segmentation, the catch-all term of rock conjured – at least to some extent – a kind of music that was played (usually) by men who possessed an onstage demeanor and attitude that said “we’re here to rock.”

Sometimes it didn’t say much more than that. And sometimes – oftentimes, in fact – that was enough. Nobody really looked to Aerosmith or Van Halen (or Led Zeppelin, for that matter) for great statements about the human condition. The songs expressed sentiments no deeper than, say, “ I Can’t Drive 55.”

That kind of music seems in short supply in 2014. Instead we have mope-rock, wherein the vocalists don’t look the audience in the eye, turn their backs to the crowd when it’s (extended) solo time, and generally seem to apologize for their existence. Not to suggest any sort of violence be associated with music, but if a “real” rocker stumbled across that kind of thing, their music would – at least figuratively – kick that kind of thing right off the stage.

Such rare creatures do still exist, though one has to dig a bit to find them. (And yes, I will readily concede that lessened demand plays a part in the scarcity of the style.) A showpiece of the we’re-ready-to-rock-you approach is Tampa, Florida’s Mojo Gurus. The name – at least for me – immediately brings to mind classic bluesmen (as in, “Got My Mojo Workin’”) and the melodic rocking of Austalia’s Hoodoo Gurus. And the music itself is the kind of thing that efficiently gets across the sort of attitude that says in essence, “fuck it, let’s party.”

The Mojo Gurus know that they’re this kind of band, too: their current tour is billed – without a hint of false humility – as “The Last Rock ‘N’ Roll Show Tour.” And why not? The new album, Who Asked Ya?, blasts right out of the speakers with opener, “Where You Hidin’ Your Love.” A beefy horn section cranks out an insistent riff while the four-piece band swaggers their way through the tune without compromise. Musically, it’s straight-ahead blues changes and Doc Lovett‘s stinging guitar solo right exactly where you’d expect it, doubled in length because that’s just how it oughta be. And for good measure, there’s a second guitar solo. Again, just because.

Sure, these guys could probably slay “Mustang Sally,” but so could a billion other bar bands. But The Mojo Gurus ply their trade without artifice. “Hoodoo Man” is hard-charging blooz-rock: not only does lead vocalist Kevin Steele‘s harmonica sound like it’s played through the de rigueur Green Bullet mic, but the vocals and guitars have that overdriven-right-into-the-red vibe as well. The band conjures a storm.

The opening of “Devil to Pay” is more than a bit reminiscent of The Rolling Stones‘ “Honky Tonk Women,” bu from there it’s a piano-led barroom rocker. It’s slightly understated compared to the rest of the disc, but subtlety and restraint are –by design – not part of The Mojo Gurus’ bag of musical tricks. Imagine if ZZ Top widened their musical approach just a bit ( and packed up the synthesizers and sequencers for good), and you’d have something not far from The Mojo Gurus.

A quick scan of the song titles provides a rundown of this band’s musical and lyrical worldview: “No Damn Good,” “Bad Attitude,” “C’mon Over to My House.” But they do more than just rock out 24/7. “No Damn Good” is built around guest musician Nina Wegmann‘s accordion, and the tune has an aura that suggests Los Lobos covering The Drifters‘ “Save the Last Dance for Me.” But that calm respite is over as the band pivots right back to “Someone Else Will, with its pegging piano figures and stomping beat. When the music stops at the end of a phrase, allowing Steele to sing the chorus lyrics without accompaniment, you might think briefly of The Georgia Satellites‘ “Keep Your Hands to Yourself.” Is that a bad thing? I think not.

They do some porch-rocking c&w on “Bad Attitude,” with Steele doing a good vocal approximation of one of the characters from Squidbillies. Jason (Del McCoury Band) Carter‘s keening fiddle and mass-singalong backing suggests the band could make a career out of the style, were they not such unrepentant rock’n’rollers. And the group does some convincing spaghetti western, Herb Alpert-meets-surf-rock on the instrumental raver “Bandito.”

In keeping with their “this is how it used to be done” approach, the group has issued two of the disc’s standout tracks – “Where You Hidin’ Your Love” b/w “Bandito” – on 7” vinyl with a picture sleeve.

Who Asked Ya? won’t change the world. And The Mojo Gurus don’t seem to be intent on any such lofty goals. They just wanna rock, and if you do too, you’re advised to check them out.