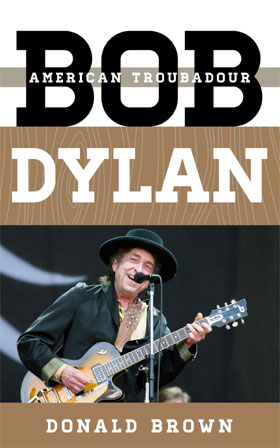 Allow me to begin with some relevant disclosure: I’m much more a “music guy” than a “lyrics guy.” I can know the words to a song – sing along with them after a fashion, even – and not give much more than a passing thought to the meaning behind (or intent within) the lyrics. There are exceptions, to be sure: the lyrics to some song can bring me to tears with their button-pushing poignancy. But in general I tend to focus less on the overall meaning of a lyric, concerning myself instead with the emotional content conveyed within the instrumentation and tone of voice. Thing is, that approach often gets me to the same place as it would for someone who pays close attention to the words.

For some artists, of course, the lyrics are the thing. The music is secondary, or at least existing primarily to further the lyrical thrust. One such artist is Bob Dylan. Over the course of near-innumerable albums, Dylan has crafted lyrics that are endlessly pored over by those attempting to glean his intent.

And in that vein, there have been – as author Donald Brown notes in his new book, Bob Dylan: American Troubadour – several Dylans. There was first the interpreter and synthesist of the work of others (most notably the catalog of Woody Gurthrie). Then there was the “protest singer,” perhaps Dylan’s most celebrated guise. Then there was the Blonde on Blonde era “Judas,” the Dylan who went electric to the disgust of some of his “pure folk” adherents. From there it was the retreating singer/songwriter, then the iconoclastic stylist who produced a stunning run of 70s albums (the most notable of which remains Blood on the Tracks).

And then there was the (on its surface, at least) bizarre born-again phase, yielding what would – for a time – rank as Dylan’s weakest efforts (he do worse later). Then there was the wizened troubadour with nothing to prove, a relatively unambitious artist whose dashed-off production style betrayed lack of interest in, well, much of anything. And finally, there’s the Dylan of today, a sort of grand old man / card shark type who releases occasionally brilliant releases, and whose erratic releases each contain scattered gems.

Brown’s book is an ambitious project: attempting to analyze the lyrics of the artist whose every word – both in songs and interviews – has been picked apart already. There are many potential pitfalls in such a project: one can become too studied, resulting in a document that is so “scholarly” as to hold no interest for the less-than-hardcore reader. Or one can go overboard and make rash assertions: “This is what Dylan meant.”

But Donald Brown deftly avoids the ditches on both side of his road to understanding Dylan. While his analysis is keen and concise, he never goes so far as to assert that a lyric definitely means any one specific thing. But neither does he come off as tentative, which would also be at best unsatisfying and at worst boring. Brown’s approach is to set each album (or era) against the backdrop of what was happening in society, politics, public life, music and Dylan’s personal life, then examine key lyrics from music in that period. He then suggests what could be at work, and leaves it to the reader to make his or her own judgments. His skill in applying this approach – again and again, through Dylan’s more difficult works – is staggeringly impressive.

Brown makes some assertions that are a bit outside the box, but he backs them up with strong, reasoned arguments. As Brown would have it, the Christian phase of Dylan’s work is not wholly unexpected within the arc of his career overall; Brown points out that many examples from that period have a fire-and-brimstone, Old Testament feel that isn’t exactly new thinking.

More importantly, Brown takes down a peg some of Dylan’s most celebrated works, and suggests a contemporary reexamination of his less-loved releases. Brown – an unapologetic fan of Dylan’s work – never makes excuses for the weakest and most erratic pieces of Dylan’s output, but he does suggest that even within those albums lie some worthy tracks.

Brown never shies away from criticizing some of Dylan’s missteps – his uninspiring, unsatisfying collaborations with The Grateful Dead, to name one of the big ones – but he goes deeper, endeavoring to discover the motivations behind such moves. And his conclusions make all kinds of common sense.

Time spent with this highly readable book will almost certainly send readers back to rediscover Dylan’s work, and the reader will come away with a new appreciation for Dylan’s more popular material, as well. Highly recommended.