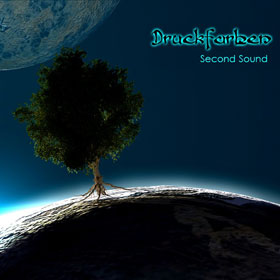 I’ve never figured out exactly why it’s so, but when it comes to progressive rock of the classic era, I’ve always loved the UK variant, while the North American-based acts have pretty well left me cold. But when it comes to modern prog, whatever they’re doing on this side of the Atlantic seems to connect with me. Spock’s Beard is the first band that comes to mind, but there are others. The latest is the oddly-named Druckfarben. This Canadian outfit draws upon familiar forebears for their musical foundation, but on Second Sound they blend it all together in a way that feels fresh and new.

So while it’s a safe bet you’ll think of Yes’ Jon Anderson as soon as you hear Phil Naro’s vocals (and the massed vocals behind him), and Peter Murray’s thick bass work occasionally recalls that of Chris Squire, there’s much more to this five-piece. Though all five are clearly masters of their respective instruments, multi-instrumentalist Ed Bernard is the band’s secret weapon: the credits list him as responsible for “guitars, vocals, violins, violas, mandolins, dobro, banjo, pint glass and incidentals.” The violins in particular recall Kansas at their very best (and don’t make me think of Curved Air or Eddie Jobson). Keyboardist William Hare isn’t afraid to mix the cast-in-amber sonic textures of the Mellotron into the band’s sound, and the result is a sound that balances classic-styled prog (with a strong emphasis on melody and hooks, thank goodness) with a modern approach that steers clear of metal.

On Second Sound, Druckfarben dial back an emphasis on fiddly-bits lead guitar in favor of acoustic, but lovers of soaring solos will enjoy the judiciously-placed axework. Troy Feener isn’t a showy drummer, but he anchors the band while providing tone color of his own in an understated way.