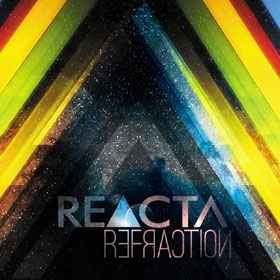 Admit it: Mexico isn’t the first (or second or third or sixth) country you think of when considering new rock bands. But I’m here to tell you that if your tastes still run toward melodic, driving mainstream rock, Reacta are well worth a listen. From Aguascalientes (about 100 miles Northeast of Guadalajara, if that means anything to you), they play a sort of rock that feels a bit like what Coldplay might sound like if they rocked harder and allowed themselves to be influenced by, say, Radiohead and/or The Police.

The band sings in English, with no discernible Mexican accent, and their sturdy tunes are reminiscent of Soundtrack of Our Lives and other alternarockers who draw inspiration from the melodic side of things. Clear lead guitar work and gurgling synths are joined by a radio-ready production style (though the press kit suggests that making a pro-level release in the band’s hometown is no easy task). Not earth-shattering or groundbreaking, Refraction is nonetheless a very well put together album that stands up to repeated listens.

Reacta secured an opening spot on selected dates of Little Dragon‘s last tour, and they did a limited USA run in April. If the stars line up just right for the band, you may be hearing more about Reacta in the future. And they’ll deserve the notices.