Roger Hart – manager of Paul Revere and the Raiders during the 1960s – picks up his story about developing the treatment Madness, an idea that he says was realized as the hit TV show The Monkees. – bk

“And,” he continues, “I gave it to one of the program directors at ABC, in care of another one of their execs. Of course we were already on ABC a lot. And what I consider an honest answer came back: ‘You’re already on television so much that this [idea] isn’t something we would fit in right now. And it would take a long time. So it’s probably nothing we can do anything with right now. But it’s cute.’” So against a backdrop of the Raiders being busy with TV and playing on the road, and having hit records, Hart quietly dropped the idea. “It was irrelevant,” he says.

“But,” he continues, “some time – quite a while – later, I was having lunch [with someone]. And it was revealed to me…this person said: ‘Just for making you feel good – nothing more – here’s what happened to your treatment. ABC thought it was cute, and so they sent it over to Columbia Screen Gems. And you can take it from there how it fit, and what happened.’”

“So many ideas are picked,” Hart observes, “and you really don’t know how or if you have any rights with [the original idea] or not. I had registered the treatment with the Screen Writers Guild for some reason, paid my fees. But I doubt if that can even be tracked now, because…why would I have wanted to maintain that idea for forty-five or more years? But anyway, my friend at ABC told me, ‘I just wanted you to know.’”

Hart recalls “a particular individual” from ABC talking to his son in the last couple of years (the unnamed person is now deceased, Hart says), and saying, “I was just a kid at the time. I remember bringing that treatment home and making notes on it.” Hart admits that he hasn’t read any historical account of the era penned by Bob Rafelson or Don Kirshner, but understands that one of them says, in effect, that they got the idea for The Monkees “from a friend at ABC.” Hart can see the thinking having gone like this: “We don’t have Paul Revere and the Raiders; maybe we create our own.” But he admits that the Raiders were clearly “inspired by A Hard Day’s Night. But I’d add, wasn’t everybody?” 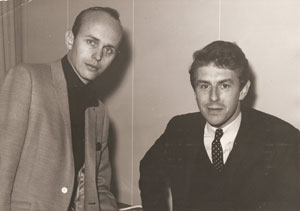 I ask him how long this Madness treatment of his – he no longer has a copy – ran. Surely it was more than a back-of-an-envelope thing? “Oh, yes!” Hart assures me. “It had a title pages and I don’t know how many pages. I do remember the opening scene: five rock’n’rollers, somehow commandeering a plane and barrel-rolling into LAX. It was madness from the beginning.”

Hart doesn’t seem particularly interested in an official credit line for what he sees as his part in creating the idea that would become The Monkees TV show, but he wouldn’t mind some recognition. “The Madness story is the sort of thing where you wish you had at least a thank-you letter or something,” he admits. But he remains sanguine about the whole episode: “It keeps us all humble to realize that we didn’t invent the wheel; we just get to roll with it.” He is justifiably proud of the success that his band enjoyed (an integral part of the band’s operations throughout their prime era, to this day he always speaks of the Raiders as “we”), he points out that The Raiders “pulled off some things that were novel or unique for their time,” and reminds me that the group had “a string of hits that took us a long way: two years on ABC plus every conceivable other show, Batman included.”

Hart ruminates on the idea that “we all contribute things,” sometimes unknowingly. He recalls the period after Where the Action Is had been cancelled, and the band’s core “power trio” of Phil Volk, Drake Levin and Mike Smith had left to form Brotherhood (more big news on them soon – bk). “I can remember suggesting something to one of Dick Clark‘s attorneys, a man who had just left to join a big agency. We were having a conversation about television. And I said, ‘Joe, we need to find another something for Paul and Mark [Lindsay]. Some kind of what’s-happening thing, you know. The music scene. Bringing people in.’ And it became Happening ’68 and later, It’s Happening. So right there, the seed was planted. But there were no credits for me. In those days, you usually didn’t think to ask for credits. And,” he adds with a self-deprecating chuckle, “I probably wasn’t bright enough to ask.” 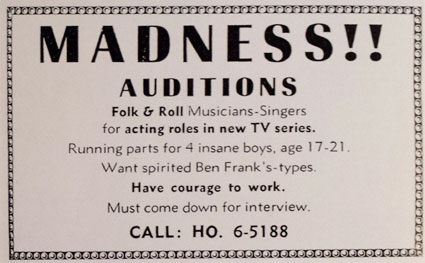 Roger Hart remains philosophical about the whole Madness episode, and indeed of all the ups and down of the 60s and beyond: “The thing we all have to remember is that we can’t live in the past,” he says. “But,” he adds with a wink and a grin, “it’s a nice place to visit.”