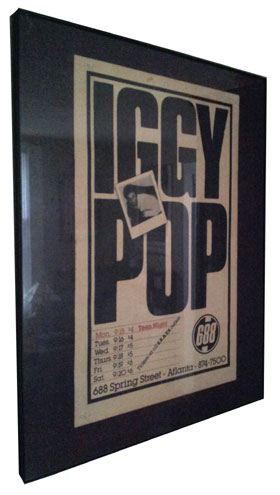 It was 1980. I was all of sixteen, and enrolled in a private high school that had only gone co-ed the year before I started 9th grade. I lived in the white-bread suburbs of North Atlanta, and my idea of going to “the city” was getting my Dad (or one of my friends’ dads) to drop us off at the mall where we’d catch a MARTA bus into Buckhead. Now, Buckhead wasn’t (and isn’t) the city-proper; in those days it was a conglomeration of high-end shopping malls, restaurants, stately older homes, and Oz Records.

No points if you guessed that Oz was our favorite (read: only) Buckhead destination. This large record store not only had a great selection, it was equipped with a used department; there I scored copies of relatively recent titles such as Wings at the Speed of Sound and Gary Wright‘s Dream Weaver for not much more than $2 or $3. And they had bootlegs, too…but that’s another story.

Point being, really, that I lived a safe, somewhat provincial life. One semi-edgy thing that I did do was spend study hall or free period with some of my good friends (usually Randy, David and/or Eddie – how’s that for a bunch of suburban-sounding names?), listening to albums we’d each bring from home. We’d check a portable phonograph out from the school library, and take it down to the breezeway (the classroom buildings were sort of built on stilts), find an outlet and spend an hour or so spinning new music. Those times would be my first exposure to groups like The Psychedelic Furs (they had just released their first – and best – LP) along with some true “outsider” acts and titles. While I’d as often as not bring something along the lines of a George Harrison LP, my friends would turn me onto things like Lou Reed‘s Metal Machine Music, Half Japanese, The Residents and other decidedly uncommercial offerings.

So when my friend and classmate Randy suggested I go with him to an upcoming concert, I knew it would be pretty well outside my frame of musical reference. To that point, I had only been to a few concerts, most notable among them my very first: Electric Light Orchestra in October 1978. (Yes, that was the spaceship/hamburger bun tour. Pretty cool.) This show would be taking place at a (then and now) legendary club in midtown called 688. The artist in question would be doing a five- or six-day residency, and while 688 was most definitely a bar (and a punk one at that), this residency was to include a special “teen night.” So we could get in on this no-alcohol club date.

So having convinced my parents that we’d be safe, I went to the local record store (“S.E.A.T.S. Outlet”) and bought my ticket to see…Iggy Pop. Now, I had never heard The Stooges, nor any of Iggy’s subsequent work, so Randy set about schooling me. He brought in the Bomp Records green vinyl Kill City, and I thought, well, wow. This is some pretty abrasive, angry stuff. Then he played me Iggy’s then-current album, Soldier. That was a little easier to take, I thought. I think Randy might have brought in and played The Stooges, but I am sure he didn’t turn me onto Fun House.

Having heard these records, I felt reasonably confident that I knew what I was in for.

Monday, September 15. We arrived at 688 when it was still light outside. The area around the lonely, dingy white concrete block building at 688 Spring Street looked like a fairly dangerous place to be once night fell, so as soon as the doors opened, in we went. The place was dark and pretty decrepit. There was a bar near the back of the smallish room, but as I recall it wasn’t open, even for sodas and such. There was no snack bar.

The stage was no more than two or three feet higher than the main floor. And it was no larger (and in fact probably smaller) than the stage I recalled from my old elementary school’s cafeteria. The ceiling was pretty low, too. So while I had very little prior concert exposure, I could see that this would be a different experience. Unlike the Omni sports arena or Fabulous Fox Theatre, there were no seats! We’d have to stand the whole show.

I did notice that on the right-hand side of the stage, someone had scrawled in large, crude black lettering the entire setlist. A few of the song titles looked familiar: “Search and Destroy” from Raw Power, “I Wanna Be Your Dog,” “No Fun.” (As it happened, Iggy’s set list would remain on that wall, enshrined for history, as long as 688 remained open.)

A little while after the supposed official start time, the band came out. While I didn’t know (much less appreciate) it at the time, I would later learn that the bassist on the tour was Glen Matlock, most well known as the man who was kicked out of the Sex Pistols in favor of non-musician Sid Vicious. I don’t recall even knowing who the other players were.

And there’s a good reason for that: when Iggy Pop hit the stage, everything else became secondary. Almost immediately, he stripped down to bikini briefs and socks. I laughed (to myself; I didn’t want to get beaten up by some hardcore fan) as I noticed that they were a matched set: lavender with what looked like little crescent moons or some other pattern on them. I wasn’t about to get close enough to find out for sure.

Iggy grabbed the mic in that Iggy way of his, and roared into it, “Anybody got any drugs?” I didn’t know what to think; was he joking?

He was not, and the crowd did not mistake his request for a joke. From all directions, hands extended toward him, offering all manner of illicit substances. He received all of them, consumed them all on the spot, and then the show started.

I’d like to be able to recount the evening’s details from this point on, but I was so unnerved by what I had just witnessed that the rest of the evening went by in a blur. I do recall that it was very loud, that Iggy jumped into the audience several times, and that every few minutes an audience member would storm the stage, only to be violently manhandled by bouncers back into the crowd. Iggy didn’t do anything that involved broken glass or peanut butter.

I suppose I enjoyed the show. But more importantly perhaps, I think I realized that I had witnessed something historic. I saved my ticket stub (I still have it) and on the way out, I pulled the black-and-white concert poster off of the grimy wall. Some thirty-three years later, it is framed and proudly displayed on my living room wall.

I’d return to 688 a number of times in subsequent years (once I turned eighteen). Some of the more memorable shows I witnessed included LMNOP and Alex Chilton. When I saw the latter, there was a sort of nerdy guy standing next to me in the crowd, wearing an FFA jacket. I stared at him for a moment, and finally worked up the courage to ask him: “Are you Mike Mills?” The bass player for R.E.M. said yes. But while that was cool, nothing would really compare to the experience of seeing Iggy Pop on that stage in his socks and undies, singing to us teenagers that he wanted to be our dog.