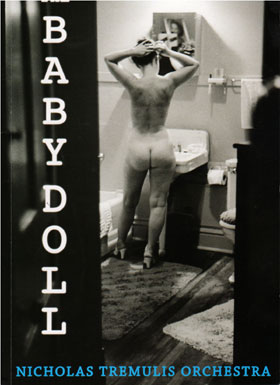 In and of itself, eclecticism is neither a good nor bad characteristic. Consistency may in fact be (as Ralph Waldo Emerson sorta-said) the hobgoblin of a little mind, but it helps sell records. People like knowing what to expect. Not everyone wants adventurism with their rock’n’roll.

But some of us welcome the musical curve ball. And for us, For the Baby Doll, the new disc (and book, but more on that in a few grafs) from The Nicholas Tremulis Orchestra delivers just that. The NTO is an orchestra only in name: it’s really Chicago-based Tremulis (heard last on the Candy Golde EP not so very long ago) on vocals, guitar and keys, plus four other musicians. Presumably, none of them is wearing a tux or – save the drummer – playing an acoustic instrument. This is some rockin’ stuff. While Candy Golde was a vaguely retro-flavored project, For the Baby Doll aims for a more timeless feel.

“You’re Gonna Lose (Everything You Got)” is a barbed-wire riff rocker. “Without You Without Me” is jangly, anthem-rock vaguely reminiscent of Traveling Wilburys. “Lost Without You” is an epic storytelling rocker in the grand tradition of Bruce Springsteen and Thin Lizzy‘s Phil Lynott; it deftly mixes vivid word-pictures with a wide-screen, sweeping arrangement worthy of Jack Nitzsche. This song’s dynamics, in particular, conjure tantalizing thoughts of how Tremulis’ music might go over live onstage.

“Everybody Here” finds Tremulis adopting a falsetto vocal that feels a bit like Prince. The Stax-flavored horn charts take things in different yet equally funky direction. “You’re Too Much (But Never Enough)” may have a somewhat clichéd title, but the song itself is a speedy, noisy roadhouse rocker that all but steamrollers over the listener. (There are worse ways to go.) The song’s manic slide guitar is brief and will leave you wanting more.

Speaking of titles, “If God Were the Devil” more than makes up for any lack of titular originality elsewhere. With an old-fashioned melody that’s equal parts The Motors‘ “That’s What John Said” and John Lennon‘s “(Just Like) Starting Over,” Tremulis is in Mink Deville mode, spinning another story-song rumination. The chorus of female backing vocalists – used to great effect throughout For the Baby Doll – are at their most effective here. “Push It” is just this side of ordinary, but still an enjoyable swaggering rocker. The loping “Super Human Love” applied a super-heavy beat to what might otherwise be a c&w-flavored tune. Its singalong chorus and steel guitar reinforce the latter feel, but the chunky rhythm guitar keeps it closer to Blasters territory.

“For the Baby Doll” is the album’s penultimate track. With a lyric set in New York City, it kicks off with a plaintive vocal backed by forlorn church bells, acoustic guitar picking and sounds of the city streets. When all the players kick in, it turns completely instrumental and sounds and feels like famous NYC resident John Lennon. The Spectorian “Walk in the Sun” very much has the ambience of a classic album-closer, in which Tremulis and band pull out all the stops. Again there are hints of Springsteen, Bob Geldof, Mark Knopfler and other purveyors of that bigger-than-life brand of songcraft.

Tremulis is a proud member of the old-school; he believes in the album as a medium and (accoridng to the album’s press kit) he “like[s] packages.” To that end, For the Baby Doll isn’t merely a CD. No, the disc comes enclosed in a 36-page paperback book that includes a sort of mini-novel. Notwithstanding the inclusion of a “Forward” (sic) by Michael Thomas, the book is comprised mostly of a thirteen-page reminiscing memoir by Tremulis in which he recounts his days hanging at the seedy NYC bar mentioned in the album’s title. He helpfully includes all the song lyrics as well, in reasonable print size so’s you can read ’em, and said lyrics make for good reading (a rarity, that).

Even without the book – a nifty idea on its own and worth the time spent with it – For the Baby Doll is an example of eclectic rock’n’roll at its finest. Recommended.