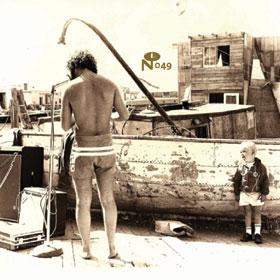 Near the tail-end of the 20th century, I played piano in the “house band” for a monthly coffeehouse in the suburbs of Atlanta. Since my bandmates often played acoustic twelve-string guitars, there were occasional gaps of time between songs, given over to tuning. I gamely filled those gaps with musician jokes. A favorite was this: Q: What does new age music sound like when it’s played backwards? A: New age music.

It got some laughs; more than the jokes about singer/songwriters, anyway. And while it’s true that to the uninitiated, music that falls into the new age bag can sound like nothing’s-going-on-here, a more close listen – to the good stuff, anyway– can be a rewarding experience.

In fact, the best of the genre probably is better described as minimalist (think: Philip Glass) or ambient (such as Brian Eno). And within this little-explored genre, some very interesting work has been created. Among these are the works of an enigmatic artist known only as Iasos. Those wily archivists at Numero Group have put together a single-disc career survey of the man’s work with thirteen tracks spanning the last few decades.

Celestial Soul Portrait takes a unique and potentially risky approach: though the booklet that accompanies the disc is substantial, it provides little to nothing in the way of discographical information. Some of the tracks are discussed within their historical context, but there’s no chronology or anything of the sort in the package. Listeners are left to experience the instrumental music unfettered by such details as what-instrument-is-that and so forth.

What we can discern is that Iasos makes intelligent use of effects pedals, MIDI technology, analog synthesizers and other machinery in service of his atmospheric compositions. There’s nary a click of percussion on theses thirteen tracks; everything floats by in a soft, slightly out-of-focus way, and clearly that’s Iasos’ intent.

While not exactly melodies in the traditional sense, Iasos’ compositions are texture pieces that – if you’re antsy – might frustrate. If you’re the sort who needs your music to “go somewhere,” tracks like “Blue Fire Realms” might frustrate you. Sounding a bit like the extended textural pieces on Todd Rundgren‘s 1981 LP Healing (though, again, without percussion), the song introduces a tapestry of sounds, but they float by, creating an impression that is open ended, leaving the listener to fill in the blanks in his or her mind.

The obscure, unknowable artiste is a common theme in esoteric music, and Iasos’ character fits that to a T. While Ryan Boyle‘s liner notes chronicle enough about the musician’s life to provide some useful context, many key details (such as his last name) are intentionally left out. Iasos is certainly not nearly as “weird” as, say, Jandek, but one can assume that he values his relative anonymity as part of what he needs to create his sonic tableaux. Even Allmusic.com’s bio on the man is a mere 59 words, and no doubt Iasos likes it that way.