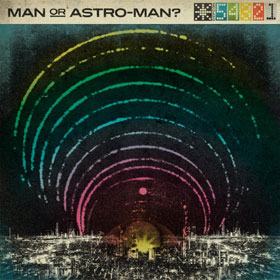 I often enjoy what one might call “high concept bands.” Our friends at open-source Wikipedia define the term this way: “…a term used to refer to an artistic work that can be easily pitched with a succinctly stated premise.” Examples might include a band that plays twangy instrumental surf-rock while wearing Mexican wrestling masks, doing tight onstage choreography, and speaking to the audience only in Norteamericano Español (Los Straitjackets), or never speaking to the audience, using lots of guest artists, and wearing full-face helmets (Daft Punk). You get the idea: while to the uninitiated, these concepts might seem silly and distracting, they give the artists some conceptual framework upon which to hang their output, and – it could be argued – provides a level of artist anonymity that allows the music to be enjoyed on its own terms, freed from the normal what’s he-up-to-offstage nonsense that follows so many acts.

Of course it helps if the music is in fact worthwhile. No amount of (what detractors might term) gimmickry can rescue weak music…well, as long as we set aside the example of KISS, I suppose. In any event, the unwieldy-named Man or Astro-man? has made a career as underground darlings of a sort by crafting their own style of rock’n’roll. A combination of surf’n’spy guitar rock and found sounds (often from cheesy 50s sci-fi movies), Man or Astro-man? Are sometimes described as Duane Eddy meets DEVO. That’s too tidy a description, but it provides a useful touchstone.

Listening to the music provides a better one. On their latest, Defcon 5 …4…3…2…1 , the band manages to be true to their basic sound while still feeling (more or less) modern. So while there’s plenty of tremoloed Fender blast on cuts like “Defcon 5,” the tracks rock with an intensity you’d expect more from Foo Fighters or even a metal band. “Antimatter Man” is dissonant and bent, but it still steamrollers with the intensity of a 60s biker anthem a la Davie Allan and the Arrows . It’s distorted vocals (something of a MOA? trademark) obscure any story or message, but one gets the impression that the texture of the vocals is the point here.

Sometimes amidst the cacophony it’s hard to discern exactly what’s happening: is that (pseudonymous) Avona Nova ‘s guitar, or is it Star Crunch ‘s keyboards? Or both? Or neither? Or Star Crunch’s lead guitar? The answer isn’t especially important; again, it’s the total effect that they’re going for. The rhythm section – Birdstuff ‘s thundering drums and Coco ‘s bass guitar – are sometimes buried in the messy mix (thank Steve Albini ), but their presence is felt, even if it can’t be always clearly discerned.

The hooks and melodies are present on all twelve songs; sometimes they’re quickie numbers, and sometimes the band stretch out a bit. Electronic effects and keyboard crackle, buzz, swoop and soar. On “Disintegrate,” the band swaggers with the snotty menace of Phase Shifter -era Redd Kross .

The song titles telegraph the kind of vibe Man or Astro-man? Are aiming for: “Codebreaker Seventy Eight,” “All Systems to Go,” and five songs – in descending order, spaced throughout the disc – with “Defcon” in the title. Even when they dial back the guitars in favor of sequencers (as on the swooshy, Air -like “Defcon 4”), they still rock; it’s a wonder the group’s music hasn’t been put to extensive use in film soundtracks. Coco’s bass is in tight lockstep with Star Crunch’s lead guitar on “Communication Breakdown Pt. II” (no relation to Led Zeppelin ). Another synth-based instrumental, “Defcon 2” has the feel of Apples in Stereo . “New Cocoon” features what sounds like a Mellotron, of all things, plus some chanted found-sound material that reminds this listener of the “You’ll Never Walk Alone” coda of Pink Floyd ‘s “Fearless.” On “Electric Arc,” the band takes a rare playing-it-straight approach, with clearly enunciated, non-processed lead vocals.

And the presence of that song makes an interesting point: As appealing as the band’s high concept is, they still have plenty going for them when they dispense with the weirdness and just plain rock out. As it stands, Defcon 5…4…3…2…1 has plenty of both rock and nuttiness. The album closes with what starts out as a “Secret Agent Man” pastiche, “Defcon 1.” But it rocks harder than any version of that TV theme, and travels to some places the 60s tune could never go, thanks to the trademark sonic stew of this singular band.

Postscript: If you’ll allow me an indulgence, I have to tell a little story. The details may be off, as I heard this a number of years ago. But a friend of mine used to play in Man or Astro-man, and along with his twangy instrument, he had a fascinating amplifier. It seems that old Bell and Howell 16mm sound film projectors (ask your parents) had pretty robust built-in tube amplifiers and speakers. My friend had laid his hands on several of these, and re-wired them so that he could (a) run his guitar through them (they look pretty cool) and (b) project “found” footage on walls and screens during the performance. Cool, right? Yeah, I thought so, too.