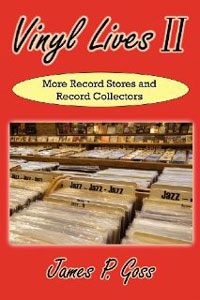 James Goss‘ 2010 book Vinyl Lives was built around a series of interviews the author conducted with owners of independent record stores around the country. Woven together, these individual stories painted a picture of the state of this niche market. Consistent themes developed; chief among these was the idea that owning and operating a record shop was more of a calling – something these people were compelled to do – rather than a means toward financial riches. And of course an abiding love for music was shared by all of the interviewees.

Now, a few years later, Goss has returned with a second volume. Between his introduction and the narrative that develops through these contemporary interviews, Goss lays out and explores some of the changes that have arisen in the marketplaces since his first book was published. Vinyl sales are on the rise, and while they will never gain serious market share, they’re no longer a blip on the screen.

Vinyl Lives II: More Record Stores and Record Collectors expands its focus a bit to include collectors as well; many of these individuals are connected to one or more of the shops profiled in the book. And Goss wisely showcases the fact that record collecting is no longer a wholly male-centered activity; several of the collectors he interviews are female, and one is even quite young.

And some of the shop owners Goss talks to have expanded their focus as well: some stores sell books, comics, “smoking accessories” (like the old days), and other related merchandise. One point that most store owners seem to agree upon is that whatever profit opportunity exists is centered on the sale of used – not new – vinyl. This point is illustrated via a few humorous quotes; one store owner explains his argument for buying used vinyl cheap. Paraphrasing – I don’t have the quote handy – the store owners responds to a protestation from a would-be seller: “But I heard this album is worth $20!” The owner responds (again I’m paraphrasing), “Right. That’s why I’m buying it from you for $5. So I can sell it for the $20 it’s worth.”

Two fascinating threads are woven throughout many of the interviews. The first is the shop-local movement, known under a variety of labels including “Local First” and “Project 3/50.” These are, at their core, a response to the encroachment of big-box retailers, but the approaches are built around common-sense, practical steps consumers could take. These are not ivory-tower, elitist concepts; the store owners are in general a clear-eyed, realistic lot with their feet firmly on the ground.

The second thread is discussion of the Occupy movement. Perhaps it’s a function of the timing of the interviews; the Occupy Wall St. protests were a high-profile news item in every day’s headlines when Goss was speaking to these shop owners. But I suspect it’s more than that; not to paint these store owners with a broad brush, but their independent mindsets seem to have led them to focus on the Occupy movement, and they all have interesting things to say about its ramifications and what it might mean to their business overall.

Throughout the book, I found myself making mental notes: should I ever again visit Pittsburgh (a city I found oddly – and surprisingly – dull when I traveled there on business a few times in the 90s), I will now make it a point to include a several-hour visit to Jerry’s Records, where, Goss tells us, I will find two million clean records, mostly in the $3-$5 range. Just reading that makes my heart beat a little faster. Goss also discusses the internet’s role in some of these retailers’ success, and readers will find a number of new online sources through which they might locate their ardently-sought rarities.

By any measure, but especially for a self-published book, Vinyl Lives II is quite well-edited. My few criticisms of the book are exceedingly minor. Some photographs would have made a good book even better, and Goss’ choice of type face and size make the book feel a bit less professional than it might otherwise have been. But neither of those things detracts from the quality of Vinyl Lives II in an appreciable way. If your idea of a good time includes hours spent poring over used vinyl in a dusty, poorly-lit shop off the beaten path, then a few hours spent with Vinyl Lives II: More Record Stores and Record Collectors may well be equally as enjoyable.