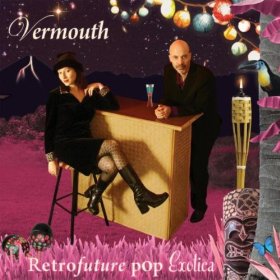 Being of a certain age, I remember the short-lived exotica revival of the nineties. If you blinked, you might’ve missed it: for a brief few moments in 1994, the pre-Beatles hi-fi-centric craze was all the rage. The fleeting revival had as its exemplar a band named after a cocktail, Combustible Edison. Fronted by a female vocalist calling herself Miss Lily Banquette (neé Liz Cox, formerly of Christmas) and led by her cohort The Millionaire (Michael Cudahy), the band conjured – mostly through their original material – the forgotten sounds of Martin Denny, Esquivel and a select few others.

Sure, it was gimmicky, but it was also quite entertaining in that postmodern ironic 1990s way, especially set against the not-especially-clever backdrop of grunge, the prevailing rock musical trend of that era. The whole “cocktail nation” vibe caught fire for a few brief moments, and no less a luminary than Todd Rundgren went so far as to cut an album (With a Twist) of his best-loved songs, re-imagined in tiki lounge style (the touring dates in support of it were a scream, too, what with two lucky guests at each show seated at a bar onstage during the set, compensated for their trouble with ample umbrella drinks).

But of course it didn’t last; the fickle public moved onto whatever the next transient musical/pop culture craze was (and no, I don’t remember).

Yet not everyone forgot about it. Or at least they didn’t forget about the original music that had spawned the style. So right out of left field in 2013 comes another booze-inspired group name (this time only an ingredient rather than a finished cocktail), Los Angeles-based Vermouth. And once again there’s a female singer/musician fronting the outfit; this time it’s Justine Kragen. And her musical co-conspirator (the pair are responsible for nearly all the band’s music and lyrics) is multi-instrumentalist Steve McDonald (no relation – I don’t think – to the Redd Kross guy). Their debut album is called RetroFuture Pop Exotica. They certainly get points for a direct approach; that title could pretty well serve as a one-sheet for the band (or a review, if one was in a hurry).

While there’s an inescapable pull toward viewing Vermouth as kitschy revivalists – I mean, it’s not as if they’re mining a subgenre with a long and storied tradition; for all its many charms, exotica was/is arguably a musical blind alley – or dismissing them as little more than Combustible Edison for the 21st century, both of those conclusions would be unfair. And they’d lead to passing by some delightfully fun music.

This stuff swings. And it folds in surf’n’spy guitar, creating a vibe that is kindred as much with Los Straitjackets as, say, Henry Mancini. Loads of vibraphone – almost always a good thing – and Kragen’s clear-as-a-bell voice propel the songs forward. The band’s muscular backing is a thing to behold: tight and strong like a crack rock band, they swing like a jump blues outfit. A strong sense of dynamics means that the songs feel like movies for your mind. Everything from Dixieland to free jazz to spaghetti western-styled breaks crop up on this disc, and somehow it all holds together.

Lyrically the songs veer between wacky, goofy and – occasionally – just on the edge of decadent. Sometimes the music is played off against the lyrics, each aiming for a wildly different direction; “Tidy” is a good example of this effective and tension-filled approach. Just when you expect the song to explode into a rocking section, instead you get heavily reverbed guitar and a bunch of jungle bird calls. Yet in context it makes some sort of sense. “Goggle Boy” is thrilling and silly (listen to the lyrics about vodka helping wash down the Red Bull), and the garage-y combo organ stylings plus sharp, angular guitar work make it perhaps the album’s best track (and that’s saying something). Kragen’s double-tracked vocals might make you swoon, too. And Curtis Cunningham‘s deft drum work throughout the album is light, assured, varied and incredibly expressive.

Part of why RetroFuture Pop Exotica is so successful is that second word of the title: the songs are built upon a decidedly pop foundation. So while the arrangements and instrumentation often venture outside of familiar pop territory, the melodies are rooted in convention, and thus remain accessible to ears not attuned to, well, this weird kinda stuff.

Toward the second half of the disc, Vermouth slip in a pair of (relatively) conventional songs, “Curious” and “Blue Sky.” Both point out their mastery of a wide variety of styles; these aren’t strictly exotica.

Missteps are few on RetroFuture Pop Exotica. “Go Go Dancer” is strange, even by this album’s standards, but still works if you imagine something like a Speed Racer cartoon while listening. Only “Over the Counter” with its grating vocalisms and insistent “nee-nee-nee-nee” fails to land; it’s the only place on RetroFuture Pop Exotica where I even considered reaching for the skip button. But what I skipped to was the head-spinning antics of “Pretending,” a manic tune that sounds like nothing so much as an exotica-flavored rethink of Robert Fripp and the League of Gentlemen. Discotronics? I don’t know, but it’s some otherworldly fusion of punk, cocktail jazz and progressive rock. And those keyboard lines! Yikes!

It’s hard to know if this re-revival/update/rethink of a short-lived 50s subgenre will set the pop landscape of 2013 on fire (you set a match to a Combustible Edison, by the way), but regardless, RetroFuture Pop Exotica is a trip well worth taking.