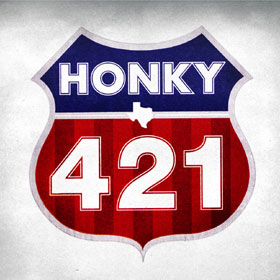 If you will, imagine for a moment an unholy cross of Metallica and ZZ Top. If you can’t wrap your mind around how exactly that might sound, a spin of 421 by Honky would provide you with a fairly good approximation. Taking the aggressive, precise, turn-on-a-dime dynamics of the former and welding them onto the straight-ahead boogie aesthetic of the former (or their pre-synths-n-sequencers releases anyway), Honky pound it out in the most exacting manner possible.

421 is most certainly not for the weak-hearted; the songs come atcha fast and furiously. Floor-shaking bass lines courtesy of JD Pinkus (if that’s not a Lone Star State musician’s monicker then I don’t know what is) are in such tight lockstep with the guitar work of Bobby Ed Landgraf (ditto on his name, yes?) that one might think – just for a second – that this stuff is the product of some ProTools-y studio effort. But the sweat virtually pours off of the translucent blue vinyl on cuts like “Just a Man” and the brief instrumental “4:21,” so if these guys are anything short of 100% authentic, they’ve fooled me, and I don’t want to know differently.

These songs are high octane metal boogie, but there’s nothing throwbacky or traditionalist about this music. Honky may seem to have come out of nowhere, but as it happens, Pinkus was in Butthole Surfers, and 421 is the sixth long-player (each on a different label; are these guys hard to work with or somethin’?) from Honky since their 1998 debut.

421 is a prime exponent of Honky’s branks of southern rawl Anchored by Justin Collins “drummage” (as it’s creditedo n the sleeve), the band’s music takes the best of the aforementioned bands’ styles, and then strips away that which makes each of them less satisfying than they oughta be: though Honk’y’s airtight ensemble playing echoes Metallica, they are laudably free of that band’s too-selfserious-by-half, humorless approach. Yet while Honky has an undeniable sense of humor (previous albums have sported titles like Attacked by Lesbians and Balls Out Inn), they are in little danger of becoming cartoons of themselves as ZZ Top did long ago. And the trio displays – gasp! – subtlety on tracks like “All for Nothin’” and “Over Easy” (the latter of which manages to be about both sex and breakfast); both are full of vocal harmonies, hooky riffs, and precise finger picking.

This is one record that – if you like it all – you’re gonna wanna play at something approaching maximum volume. Simply put, 421 is designed for it. The bit of vinyl rumble you might experience will only add to the overall aesthetic experience.