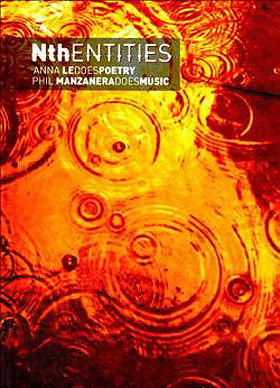 I’m the first to admit it: I generally don’t “get” poetry. I appreciate good lyrics, but as often as not my attention is drawn more to the sound and texture of vocals in music than to what’s being sung about. So it was with some trepidation that I received an advance of Nth Entities. True, I’ve long been a fan of Phil Manzanera‘s work. As a member of Roxy Music, as a collaborator (most notably with David Gilmour) and as a solo artist, his work has never been less than compelling. So I figured I’d give Nth Entities a listen.

This work is a collaboration in the truest sense. Spoken-word performances of original poetry by UK-based Anna Le are embellished by Manzanera’s music. Because I am generally suspicious (at worst) and skeptical (at best) of poetry, the billing on Nth Entities gave me some initial pause; the poet bills herself as Anna LeDoesPoetry. Well, okay. Manzanera gamely plays along, co-billing himself as Phil ManzaneraDoesMusic. Well, all-righty then. (Imagine me rolling my eyes here.)

The black poet is possessed of a very “street” British accent, an instrument well designed to deliver her poetry. Her articulate vocabulary serves her well. What makes the project intriguing – well, one of things that does that – is its initial premise/genesis. Le was asked to create a poem about Jimi Hendrix. As she admits, she wasn’t well-versed in the man’s history or his music. So her impressions are, to a degree, context-free. The other poems are variously about love, life and such things.

My original plan here was to do a collaboration of my own: I reached out to a poet friend with an idea: we would both – individually – listen to Nth Entities, and pen separate reviews. The poet would deal with the poetry, and I would address the music. Due to schedules, commitments, priorities and the vagaries of modern life, that plan never became a reality. So in the end I’m left to reflect briefly on both the words and the music.

My summary judgment is that it’s…pretty good. The poetry is, well, poetry. It’s what I think they call blank verse; the meter and rhyme have little in common with Shakespearean sonnets or (thank goodness) greeting cards. Le’s sometimes declamatory “slam” style is what someone not all that into poetry would expect: there’s a stagey feel to a lot of her delivery that sort of insists you pay attention. Sometimes the words go by in a rush; one can’t turn away, or the thread (assuming it’s even been caught) will be lost.

Manzanera’s music – mostly himself on guitar, Kaoss Pad effects pedal and keyboards with rock accompaniment from a short list of sidemen – varies to complement the declamations. The Hendrix piece (“Jimi”) doesn’t try to sound like Hendrix at all (at least not to these ears). Instead Manzanera’s music is very reminiscent of Pete Townshend‘s “English Boy,” from his unjustly-maligned (but also equally pretentious) Psychoderelict.

In the end I suppose I would enjoy Nth Entities more were it reconfigured in a way completely unfaithful to its goals: with the poetry removed. At times, I couldn’t help feeling that I had attended a recital of Manzanera’s music in a small, intimate hall, only to be seated next to a very loud, insistent and pretentious fellow audience member intent on speaking through the entire instrumental concert. “Scratch” brings together two of my least-loved musical forms – stiff, drum machine pop and reggae – and then puts poetry on top of it. The result is, to these ears, gruesome. But occasionally, Nth Entities works better: “Lego Limbs” sounds like early 70s Bob Dylan (specifically “Lay Lady Lay”), and Le’s poetry is delivered in a subtler, softer fashion. Two of the bonus tracks feature no poetry; those are my favorite pieces on the disc. And Le’s bonus “SOS” – which features no music – is her best thing on the album, too. So I’m left thinking that the collaboration overall is of dubious merit. But that’s just me, with all the baggage I bring.

The packaging is worthy of mention; it’s quite impressive. A hardcover booklet houses the CD and a very art-house design. Foldout pages provide printed versions of Le’s poetry plus a few short essays on the work. For those inclined toward a musical/poetry work such as Nth Entities, it’s hard to imagine a more pleasingly-put-together package than this. With the caveats and reservations I’ve noted, Nth Entities is guardedly recommended.