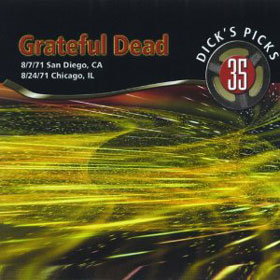 I’m sometimes accused of hating the Grateful Dead. That’s an unfair accusation, though I understand why people level it toward me. I am fond of pointing out that a 1989 Dead concert ranks among my most unpleasant concert experiences ever, and my general disdain for noodlesome jam bands (and their insufferable concert-going fans) is no secret. But as I’ve pointed out in my mild self-defense on more than a few occasions, I own quite a few Grateful Dead albums. I actually like their studio stuff a lot, and have gone so far as to track down all three of Jerry Garcia‘s 70s era solo records (one of which is absolutely fantastic) on vinyl, plus some Bob Weir solo stuff as well.

When it comes to live releases, we’re dealing with an area in which Deadheads insist the group is at its best. Though I really like Europe ’72 (the original 3LP, not the gazillion-CD version released recently) and the mostly-acoustic For the Faithful, in general I avoid live Dead. They’re just too lethargic (lysergic?) onstage for me. Earlier in 2011 the group issued a 1988 set that had its moments (when you go on that long, you’re bound to hit a few good spots, sort of like Bob Newhart‘s idea of a million monkeys with a million typewriters). From my point of view, the 80s weren’t good to the Dead (nor, with a few exceptions, vice versa).

But as mentioned, I like Europe ’72. So I was intrigued when I received a review copy of the ominously named Dicks’ Picks #35 (really? Thirty-five?). I was encouraged to learn that the four(!) discs chronicled shows from August 1971. That was a time when the Dead could (and did) really cook onstage. Reduced briefly to a five-piece lineup featuring only Bill Kreutzmann on drums, the group tended more toward straight-ahead arrangements. A look at the track list shows a set mercifully free of things called “Space” or “Drums.” And only one is titled “Jam.” In fact, across five hours of music, only four songs (out of 45) break the ten-minute mark. (Admittedly, one of those four is an endurance-challenging 25-minute “Turn On Your Lovelight,” but, well, okay.) So in general, Dick’s Picks #35 is quite listenable for the non-hardcore audient.

The four discs cover an August ’71 date in San Diego and a Chicago show from a couple weeks later, plus part of a Hollywood set from the same month. As always, the Dead can be counted on to serve up an eclectic assortment of songs. On these dates we find them turning in standards and C&W chestnuts (Marty Robbins‘ “El Paso” and Merle Haggard‘s “Mama Tried”) as well as covering the work of some of their esteemed contemporaries (Kris Kristofferson‘s “Me and Bobby McGee”).

As a Rolling Stone reviewer famously wrote, the Dead remain one of the worst-ever interpreters of Chuck Berry: here they insist on slaughtering “Johnny B. Goode.” (To be fair, their version of “Promised Land” isn’t bad. But not-bad isn’t quite…good.) They also inflict Buddy Holly‘s “Not Fade Away” on a nonetheless appreciative crowd. And two plodding versions – one at each show – of Jimmy Reed‘s “Big Boss Man” suggest that the Dead could have had a future as a boring blues bar band. And speaking of bar bands, fans of overrated 1990s rock acts take note: if you wonder where the Black Crowes came up with their arrangement of Otis Redding‘s “Hard to Handle,” please find your answer on Disc 1 of this set.

But when they’re doing their own material, the group really shines. A number of songs that would become and remain live staples are presented here in excellent versions: “Cumberland Blues,” “China Cat Sunflower,” “Sugar Magnolia” and “St. Stephen” are all here, sometimes more than once. Garcia’s solo material is also wheeled out to good effect: “Sugaree,” and “Deal” in particular are highlights. And even the elusive “Truckin’” makes an appearance.

Playing is (by loose Grateful Dead standards) tight and economical, and these soundboard recordings are amazingly clear. That’s something of a surprise on at least two counts: one, when the title has “#35” in it, one might expect a bit of barrel-scraping. And two, the condition in which these tapes were found (read the booklet) makes the fact that this set exists at all something of a minor miracle.

If, like me, you treasure the early 70s Grateful Dead as presented on Europe ’72 but don’t want that big, expensive expanded reissue, Dick’s Picks #35 is an excellent choice. Note that Real Gone Music – Gordon Anderson‘s eclectic successor to the defunct Collectors’ Choice Music – reissued three Dick’s Picks titles in 2011. This title (originally released in 2005 on Rhino) is merely one of ’em.