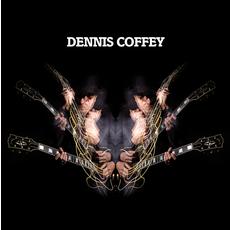 In the early 70s Coffey was a mainstay in the Detroit music scene. While he could – in his own way — drive as hard as the more well-known Motor City rock names (Kramer, Nugent, Cooper, Osterberg) the guitarist’s chosen genre was funk. In fact Coffey was one of the legendary “Funk Brothers” (he’s in that Standing of the Shadows of Motown film). With a blistering yet lean guitar attack, Coffey brought a lot of energy to other artists’ records as a sideman. That’s him on The Temptations’ “Ball of Confusion.” Edwin Starr’s “War,” that’s Coffey too. He played on Funkadelic records, sides by Gladys Knight, The Four Tops…hell, he was even on Ringo Starr’s Goodnight Vienna album.

Beginning in 1968 he started making his own records. First on a small label called Maverick, then on not-quite-as-small Sussex Records. With collaborator and producer Mike Theodore, Coffey cut four of the finest instro-funk records of the genre. He was rewarded for his efforts with the million-seller “Scorpio,” an oft-sampled track. His web site lists at least fourteen artists who’ve lifted from that single track; the list includes Public Enemy, Queen Latifah, LL Cool J, Moby and many other well-known names.

Point is, the guy’s got an impressive résumé. After his string of successful records on Sussex, he moved in a marginally less-satisfying direction, making more disco-oriented records on Westbound (the label home to P-Funk), and later moved in a smooth jazz direction.

Forget all of that, though, because in 2011 he’s back to his old tricks with a self-titled album. Actually, that’s not quite accurate: Dennis Coffey ups the ante of the guitarist’s late 60s/early 70s albums. The record serves up super-high-energy original instrumental tracks, and adds remakes of some of the finest sides upon which Coffey originally appeared. A carefully-chosen list of guest vocalists step out front to tackle the lyrics.

The stinging, repetitive lick of “7th Heaven” sets the tone for the disc. This swaggering instrumental number, with beefy horn charts and aggressive percussion, funks it up like the best thing you’ve ever heard from Earth, Wind and Fire. But that rock sensibility propels the song forward. Coffey tears up the fretboard on this track that would be perfect for a modern-day blaxploitation film. Coffey’s arrangement sense is mightily tasteful: his songs aren’t mere guitar excursions. He often (and effectively) cedes the spotlight to the other players. A tasty bass solo is one of the many highlights of “7th Heaven.”

Coffey played on Wilson Pickett’s “Don’t Knock My Love,” and his remake (featuring Orgone’s Fanny Franklin on vocals) sounds like a great lost number from an unaired Soul Train episode, yet there’s something modern about the track. Throughout the album, Coffey manages to stay true to the classic funk vibe without creating something that’s simply nostalgia.

Mayer Hawthorne lends his smooth, romantic lead vocal talents to “All Your Goodies Are gone,” a tune originally cut by the Parliaments. Dig the backing vocals. For a barn-burning remake of Funkadelic’s “I Bet You” – possibly the strongest cut on an album with zero filler — Coffey enlists two singers: Dirtbombs’ Mick Collins and Rachel Nagy from The Detroit Cobras. Coffey’s searing solo and spaceship effects are icing on top of a heavy soul groove.

The collaborations continue, peppered across a disc fully of four-on-the-floor instrumental numbers with evocative titles like “Plutonius” (with atmospheric vocal arrangement and yet another stinger from Coffey), “Space Traveller” (Coffey in Stevie Wonderland) and the thrilling wah-wah-fest “Knockabout.” Kings Go Forth back up Coffey on the heavy funkster “Miss Millie.” That track features a Hammond solo that shows the distance between Detroit and Memphis is, well, not very far. Somebody needs to make a movie just so these tunes can get onscreen; they’re that good.

Another contender for best track on Dennis Coffey is “Somebody’s Been Sleeping.” With its nursery rhyme-meets-modern-soul lyric, this cut – originally done by 100 Proof Aged in Soul (with Coffey, of course) is a prime example of 21st century northern soul. The Bellrays’ Lisa Kekaula turns in an impressive vocal on the track. Coffey’s arrangement skills here are breathtaking, adding critical dynamics to the track.

Paolo Nutini shows that he’s possessed of more range (and soul) than his solo releases would suggest on “Only Good for Conversation.” With a heavy distorted guitar riff worthy of the best 70s heavy metal, the song still keeps its funk. The disc wraps up with a freaky instrumental reprise of “Don’t Knock My Love” that evokes mental images of Coffey’s spaceship leaving the planet for some intergalactic funk.

But Coffey’s still right here on Earth. With some high profile dates at the 2011 SXSW and a tour to follow, the 71 year old axeman shows no signs of slowing down. And for those interested in his rare and long out-of-print Sussex work, a perfectly-timed compilation called Absolutely the Best of Dennis Coffey just hit the shelves. The self-titled album won’t be out until late April, but I’m already wearing out my advance copy; it’s no exaggeration to say that I’ve played it fifty-plus times already. Dennis Coffey is a must-have.