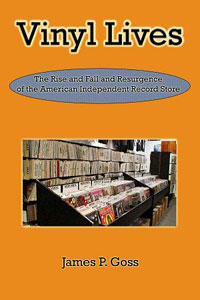 Vinyl Lives, the new book from James P. Goss, is one long mash note to the idea of the community record store. By means of a series of twenty-five profiles, Goss makes clear his love of this type of retail establishment. While popular perception is that record stores are a thing of the past, Goss isn’t convinced. Neither are a number of his interview subjects, and neither will you be once you read the book.

Through candid interviews with store owners, manager and (occasionally) employees, Goss paints a picture of record stores and their place in the American cultural landscape. By focusing not on the megachains that market music (Best Buy, Walmart etc.) but on the smaller businesses, Goss creates a portrait that is human-based, not corporate-centered.

Yes, the departed Tower and Rhino stores are covered, and so is the mighty regional presence of Amoeba. But Goss also spends time delving into the histories of legendary stores past and present. And in every case, the stories try to get at the heart of why these stores thrived, why they failed (if indeed they did), and what was special and unique about each of them.

You’ll meet some colorful characters. Some are real old-timers, people who rubbed elbows with the likes of Alan Freed. And some are mere youngsters, people who barely remember the golden age of vinyl. And while they are to a man (and sometimes woman) true believers, they’re rarely dewy-eyed optimists. These are business owners, albeit business owners who do what they do because they love it.

Certainly, for every Twist and Shout (Denver) there’s a store worthy of spotlighting that isn’t covered. I grew up in Atlanta, and that city still has a number of legendary stores. Wuxtry is one; revered powerpopper Kenny Howes worked there in the 90s when I still occasionally shopped there. REM‘s Peter Buck worked at the Athens Wuxtry. If you like (or liked) records, you probably have your hometown favorites. My adopted hometown of Asheville NC boasts the buzzworthy Harvest Records, and — like several people profiled in Vinyl Lives — the young(ish) proprietors Matt Schnable and Mark Capon have branched out into occasional concert promotion and a small label. And sorta-nearby Charlotte NC is home to the amazing Manifest Discs; a visit there will convince you it’s 1980 all over again. Bring money.

Vinyl Lives doesn’t claim or attempt to be a comprehensive look at all of the stores, of course. What it does, though, is make a good argument for why these stores shouldn’t be allowed to go the way of the dinosaur. As Goss’ portraits make clear, lots of these places carry CDs, posters, t-shirts and the other, um, “lifestyle accessories” some of us remember from the old days.

The book isn’t perfect, of course. It’s a shame that Goss wasn’t able to interest a major publisher in the book. He did try, and both his subject matter and presentation are worthy of consideration by the majors. But the publishing business is tough, and instead Goss went the print-on-demand route. As such, there’s a vaguely homespun feel to the book. Perhaps the large type is a concession to the book’s target demographic, but whatever the reasons, the choice of typeface and layout keep Vinyl Lives from looking like a book you’d find in the airport bookstand.

Not that that should discourage you. Vinyl Lives is well-written, and — for a book put together without a formal editor — nearly free of typographical errors. No small feat, that.

The book is subtitled The Rise and Fall and Resurgence of the American Independent Record Store, and though that subhead is hard to read on the cover, it’s quite apt. For anyone interested in a look into the world of record stores — and the people who love them — Vinyl Lives is recommended.

More information about the book is available from the author via his website, http://www.vinylives.com. And while it’s for sale at Amazon, why not pop into your local independent record shop and see if you can buy it from them instead.