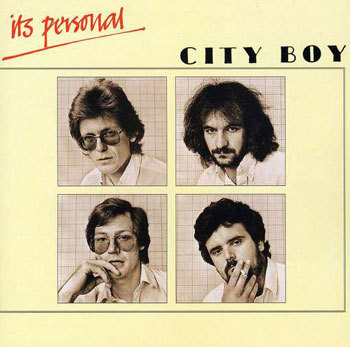 One look at the cover of It’s Personal, the 1981 album by British foursome City Boy, and there’s no question that this is a product of those new-wavey days. Two of the band members sport then-ubiquitous aviator-style glasses.

When you pop in the CD, the opening figure — coupling muted chugs of the guitar and hand claps – seems to seal the deal. Like fossils in amber, the music on It’s Personal is a time capsule of a particular era in music. But that’s not to say it’s bad. “No Ordinary Life” is a catchy tune on the order of better tracks from 10cc (an act to which City Boy was often compared) and, for this reviewer’s money, Pilot.

Pilot is known (when it’s known at all) as the band that gave us the top 40 hit “Magic.” But that group’s albums were full of delights, and the expert players formed the core of the Alan Parsons Project.

City Boy has no such pedigree, but the music they produced across several albums in the late 70s and very early 80s was tuneful, catchy stuff. Hallmarks of the band’s sound included cleanly-recorded guitars, bracing (but neither overpowering nor florid) keyboards, and high harmonies. The quartet’s hook-filled music traded in the four-minute style: establish a melody, sing over it, add a middle eight, a solo and then throw everything in for the outro. Not a radical, groundbreaking formula, but rather a tried-and-true recipe for good songs.

“Rat Race” starts off sounding a bit like Toto and other lightweight acts of that era, but the song’s winning melody will likely remain with the listener long after the song has ended. And those harmonizing lead guitars — again, more Pilot than Thin Lizzy — catapult the song from very-good territory into the realm of something special.

On “The Blind Leading the Blind,” City Boy makes a stylistic detour into reggae. The sax figure that weaves in and out of the mix helps lift the song out of the strict confines of white-boy reggae. And to be fair, City Boy’s take on the Caribbean music isn’t of a lesser quality than what The Police were doing at the same time.

Continuing their musical trip around the world, the group next presents “La Guerra de Mondo.” Sung in English (except for the chorus), the keyboard-led arrangement features stacked vocal harmonies and a four-on-the-floor beat. An appealing synthesizer solo leads into a verse with a (different) synth underpinning.

“Lovers” leans more in a classic rock direction, with riffs that wouldn’t sound out of place on an album by Triumph, Foreigner, or even Aerosmith. But the vocal harmonies and keyboards are consistent with the group’s overall sound, and aren’t especially reminiscent of anyone else.

The title track seems to be shooting for that “epic storytelling” vibe so favored by songwriters of the era such as Bruce Springsteen, Mark Knopfler and Bob Geldof. But appealing arrangement and a soaring, longish guitar solo are what really make the tune.

There’s nothing wrong with “Who Killed Delores,” but it’s one of the disc’s least memorable tunes. “Names and Addresses” sounds like Toto again. Well, Toto if Toto ever rocked (which Toto didn’t ever do). Odd phrasing keeps the song’s hook-quotient from registering as high as, say, “Rat Race,” but the tune moves along nicely. As is the case with many of the tunes on It’s Personal, a stinging guitar solo improves things greatly. Still, the album’s slightly thin production is most noticeable here. The album was self-produced at Dave Edmunds‘ Rockfield Studios in Wales, though Edmunds himself had no involvement.

The disc winds up with “Exit the Heavyweight.” Hints of Styx and Queen permeate the piano-centered arrangement. The way that Lol Mason enunciates “cel-ee-brate” seems straight out of the Dennis De Young playbook. The stacked-chorused guitars borrow stylistically from Boston and (again) Queen, but then so did lots of mainstream rock music of the era.

Overall, City Boy circa 1981 was a straightforward rock group with ever-so-slight progressive leanings; their style owed more to the arena rockers of the day, but they delivered their songs with more ground-level immediacy than many of those acts. And while “No Ordinary Life” sounded new-wavey, the (very welcome) guitar hero antics throughout the disc pegs It’s Personal as an overlooked example of above-average pop-rock of the era.

The original album sank virtually without a trace on its 1981 release; the label It’s About Music — dedicated in part to rescuing such albums from the depths of obscurity — re-released the album in late 2009. As the liner notes indicate, this is the first time the album has appeared on CD. More surprising, perhaps, is that It’s Personal was the seventh album by the group. At press time, a reunion and US concert dates were being considered. By the way — the band’s web site (the place to go for updates on such things) is cityboy.org. As this writer has discovered, the dot-com variant is, shall we say, NSFW.