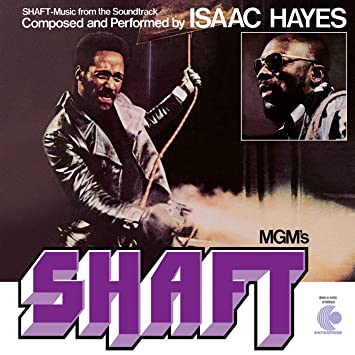 It’s no small feat to successfully convey story and emotion through music. It’s tougher still to do it in an instrumental piece. More difficult than that, even, is to get those messages across within the tight format of soundtrack music; the music has to complement the onscreen visuals and propel the story forward in a meaningful fashion; if it falls short, it’s (at best) merely aural wallpaper, or (at worst) a distraction. And beyond all those challenges, it’s mightily daunting to make soundtrack music that does more than that — music that stands on its own as worthwhile listening experience, even without the film. Isaac Hayes‘ groundbreaking 1971 soundtrack Shaft is wildly successful on all these counts. Even setting aside the brilliant, evocative title track, the remaining fourteen tracks cover a wide gamut of emotions, lengths, arrangements and musical style. In a career filled with high points (the contemporary yet very different Black Moses, to name but one), Isaac Hayes’ Shaft is a landmark recording.

It wasn’t a given that things would turn out that way. Prior to Shaft, an African-American had never scored a major motion picturee soundtrack. And while Hayes was a successful and highly-respected artist, he’d never done film work. Yet his stellar efforts were rewarded with a top-selling album. Moreover, the “Theme from Shaft” single not only hit #2 on the charts, but it won an Academy® Award for Best Original Song (not to mention a Golden Globe and Grammy®).

The songs on Shaft have been sampled far and wide in hip-hop, an ongoing testament to the enduring value of the soundtrack. At the very top of his game, Hayes produced a set of songs that built (and expanded) on his best work. While today a few of Shaft‘s tunes might sound clichéd — three guesses what was taking place onscreen while “Early Sunday Morning” played in the background — it’s worth remembering that the reason they sound clichéd is that Hayes’ musical licks and arrangements have been being ripped off for 38 years.

The songs truly do stand on their own. “Be Yourself” is top-flight Bar-Kays groove, movie or not. Throughout the songs on Shaft, Hayes makes use of a dizzying array of instrumentation, always seeming to choose just the right sounds to get his points across. Funkified guitar, sweeping string arrangements, electric piano, vibes, the jazzy guitar atmospherics of “Café Regio’s”, even the punch of the brief “Shaft’s Cab Ride”…it all perfectly creates the audio backdrop for the classic blaxploitation film.

But it’s not necessary to view, have seen or even like the film to savor the tasty mix that is Shaft. An informative liner essay — albeit one with an egregious and prominent misspelling (I’m an editor – so sue me!) — by Ashley Kahn helps put the recording into perspective. The essay reveals that Hayes and his players (the Bar Kays and the Movement) knocked out the basic tracks in two days!

The 2009 CD reissue features excellent sound; a “bonus” track “Theme From Shaft 2009 Mix” adds little beyond a hi-hat count-in, but no harm is done by its inclusion. Shaft needs no embellishing. Isaac Hayes’ Shaft soundtrack is a piece of history that also happens do be filled with fine music. Own this.