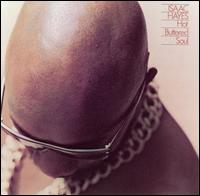 I’ve written fairly extensively on musoscribe.com about the work of Isaac Hayes. A latecomer to his catalog, I really only discovered the man’s music around the time Ultimate Isaac Hayes: Can You Dig It? came out in 2005. Since then I’ve delved deeper into his work, especially the 70s material. While Hayes is sometimes characterized as a slow-jams purveyor (sort of a slightly-hipper Barry White), that seriously underestimates the measure of the man’s work. A versatile artist, Hayes was at home concocting sweeping, cinematic arrangements. The high points of his career include the Shaft soundtrack and Black Moses, and while there are similarities between the two albums, they serve to illustrate the breadth of his creativity.

Hot Buttered Soul is one of his earlier works. The Hayes style is nearly fully developed here, and in many ways it’s the equal of Black Moses. Leading the Bar-Kays through his precise-yet-somehow-loose arrangements, Hayes holds forth on four songs.

Yes, there are only four tunes on the original album. Kind of like something by Pink Floyd. Like Pink Floyd numbers, these tracks take time to develop, and reveal their charms in stages. Never do they meander. The idea of songs with long spoken intros might sound tedious on paper; on record it’s breathtaking. Though Isaac Hayes was a fine songwriter (for proof, just listen to the amazing but insanely-titled “Hyperbolicsyllabicsesquedalymistic”), it’s in his reinterpretation of white MOR tunes that he truly asserts himself.

The reissue adds the single mixes (the ones you would have heard on “black radio” back in the day) for “Walk on By” and “By the Time I Get to Phoenix”. And while those are very good, there’s a reason Hayes produced extended arrangements of those songs (12:03 and 18:42 respectively). Hear them as they were meant to be heard.