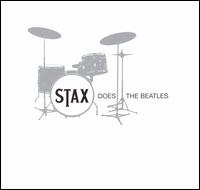 Before succumbing to the vicissitudes of the record biz, Stax Records was one of the coolest labels in the 60s and 70s. Rawer and earthier than Motown, the black-oriented label out of Memphis turned out classic albums from Isaac Hayes, Booker T. & the MGs and many others. Many of these artists wrote their own material, but covers often figured into the mix as well. With the recent reactivation of the Stax label under the Concord umbrella, the time was ripe for some interesting compilations of this material. Two new releases — Stax Does the Beatles and a lesser volume of Motown covers called Soulsville Sings Hitsville — fill that gap.

On the Beatles disc, Otis Redding tears into “Day Tripper,” Isaac Hayes reinterprets “Something” as only he can, and Carla Thomas turns in a fine live rendition of “Yesterday.” Both The Bar-Kays and Steve Cropper turn in covers of “With a Little Help From My Friends.” Cropper sticks to an arrangement quite similar to Joe Cocker’s 1969 desecration of that song, managing to find the good in it (specifically, as it turns out, everything but Cocker’s vocal). The Bar-Kays recast the song in a funkified gospel-fired version that proves the adage that a great song is a great song, and can stand up to reinterpretation in various genres.