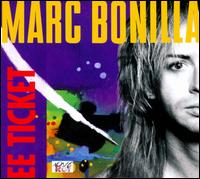 Guitar “shredding” is one of those things that as a listener one either gets or doesn’t get. For those in the latter category, the style is a showoff-y example of technique over content, the sort of thing that brings people to cluck, “I bet he gets paid by the note.”

For those who appreciate that there’s value in the style, they can point to some of the better exponents of shredding, citing people like Joe Satriani, Steve Vai and the much lesser-known Marc Bonilla as examples of players who offer subtlety and content atop the skill.

Currently the last-mentioned of these — left-handed axeman Marc Bonilla — is touring as guitarist with the Keith Emerson Group. And while Mr. Emerson is known more for skill and bombast than for subtlety, his guitarist has it all.

In 1991 Bonilla recorded and released his debut album, EE Ticket. A bit gimmicky in its attempts to tie the songs together thematically, the record offers extremely tuneful excursions in progressive guitar based pop. And while there’s no mistaking that EE Ticket is Bonilla’s show from start to finish, the presence of some very heavy friends adds to the enjoyment value of the disc. Keith Emerson, Ronnie Montrose and producer Kevin Gilbert all make their presence felt.

It’s true that the songs on this instrumental album are very much in the vein of Satriani, but Bonilla seems to work from a background that’s grounded more in pop and rock than in the jazz and blues influences that inform Satch’s work.

The rubbery, jazzy lines of “Lycanthrope” (think: Nuno Bettencourt meets Frank Zappa) rank among the highlights of EE Ticket, but each track offers some sonic pleasures. The conceptual between-song snippets try for a The Who Sell Out feel, and succeed relatively well in a 90s context. There’s easily enough variety on the disc’s dozen tracks to please fans of progressive rock, metal and heavy modern pop. (Fun fact: on the cover of EE Ticket, the photo of Bonilla looks a lot like Tommy Shaw from late 70s era Styx.) 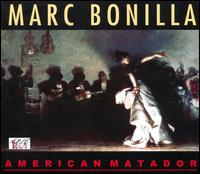 With (apparently) less to prove, and with some of the conceptual ideas safely out of his system, Bonilla followed up EE Ticket with 1994’s American Matador. More of a solo effort, this disc finds Bonilla playing everything except drums and some of the keyboard parts. While he’s developed his own style, he does surprise at times. This is especially true on “The Vanishing Road” in which he reminds this listener of David Gilmour’s guitar style. And on “Prélude,” his fleet acoustic picking finds Bonilla sounding not unlike a member of Robert Fripp’s League of Crafty Guitarists.

American Matador swings, especially on the title track. Kevin Gilbert’s production quality was excellent on Bonilla’s debut, but here Bonilla and co-producer Michael Scott achieve a big-screen sonic approach that positions the songs to even better effect. Highlights are many, but the nod goes to the fun “Get off the Fence” for a near-perfect balance of style and substance. Glenn Hughes (ex-Deep Purple, among others) does a guest vocal turn on a cover of Procol Harum’s “A Whiter Shade of Pale.” Good and all, but the instrumental version tacked on to the album’s end is a better listen.

The baker’s dozen of songs cover musical territory not too far astray from that of EE Ticket, and the Satriani comparisons remain a useful touchstone, but everything seems turned up a notch: volume, song quality, playing, arrangement. All but one of the songs make their case economically in under five minutes, and while the album — like its predecessor — sounds inextricably of its era, it remains an exciting listen a decade and a half later. (Fun fact #2: on the inside gatefold photo of American Matador, Bonilla looks an awful lot like a pre-baldness Joe Satriani.)

Noble Rot (a division of Collector’s Choice) re-released both of these excellent yet hard-to-find albums in digipak format in 2009. File these under: Strongly Recommended.