Album Review: Under the Influence of Giants — s/t 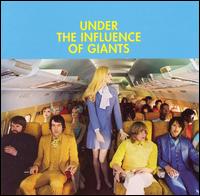 I really wanted to like this album. The buzz had it sounding like the best work of Electric Light Orchestra and The Bee Gees (assumedly the “giants” referred to in the band’s moniker and album title). While there are definite stylistic similarities to both those groups — and other mid 70s popsters like Elton John — Under the Influence of Giants doesn’t actually call to mind the finest work of those artists. It’s a somewhat pedestrian, middling effort, replete with inoffensive tunes that float from the listener’s mind leaving little lasting impression.

The album is filled with falsetto harmonies and vintage keyboard sounds (Rhodes, Wurlitzer, Moog) and Giorgio Moroder-styled strings. One wonders what research suggested there was a market for this sort of thing in 2006. Upon learning that the group included the son of drummer John “Willie” Wilcox, this reviewer had a brief flash of hope that UTIOG would turn out to be some great-but-commercially-doomed quartet like Todd Rundgren’s Utopia. It’s too early to know about the commercial doom part, but the “Great” part is not in evidence here.

There’s nothing really bad about this disc. Listeners could (and often do) do worse. But with a passel of forgettable tunes coupled with a too-coiffed-by half visual image (think Abba with four guys) the concept just doesn’t get off the ground. Sad to say, Under the Influence of Giants doesn’t serve up anything potent enough to get the listeners intoxicated. In the marketplace, Under the Influence of Giants couldn’t get arrested.