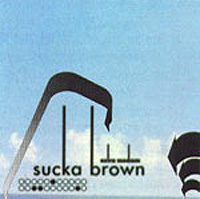 Upon hearing its drums-and-shouted-vocal leadoff, one could be forgiven for guessing that Extra Medium, the debut album by Boston-based Sucka Brown, is the latest white hip-hop act. That guess, however, would fall wide of the mark. Some twenty-five seconds into the track, Todd Denman’s tasteful electric guitar kicks in with a tone and style that owes more to 70s prog-jazz. Most tracks on the self-released Extra Medium are uptempo exercises in genre bending. The rhythm section’s shifting tempos contrast with overdubbed harmonies from vocalist Brendan Hall. “Cognizant Paranoi” lays down retro funk/soul vibe then shifts into a modern rock feel. Throughout the virtually angst-free disc the playing is tight, and the arrangements are inventive yet familiar enough to ground the group’s sound. Only on the nonsensically titled “Chainsaw Tweezer Farm” does the group stumble toward shopworn neo-Metallica shredding territory, and even there they manage a stuttering bridge that adds interest.

The album seems to improve with repeated spins. If there’s a downside to Extra Medium, it’s the running time; the disc is over is under a half hour. But faced with the choice between quality and quantity, quality wins every time, and Extra Medium‘s a winner. And hey — there’s always the sophomore disc. Upon completing a critical listen of this album, one could be forgiven for thinking that — should they decide to — Sucka Brown could pursue a successful career in any number of musical idioms. And in this case one would in all likelihood be correct.