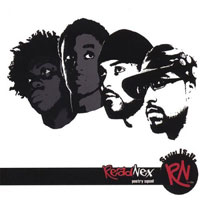 Social Issue is a collage piecing together different sounds, issues, words, and allusions. The album is very in touch with history, and has an educated basis. I was first given hope by the subtitle “poetry squad” on this album. To me, this signaled an emphasis on lyrics. I was proven right by poignant writing, with its messages about the state of our nation. This is an interesting album that explores all sorts of ideas (hence the album’s title, Social Issue).

Some of their songs have the more-typical gangsta rap feel, while others are much more unusual with background music and spoken word. I enjoy rap (with the exception of a lot of the worn-out shit that gets played on the radio), but it’s sometimes hard to pinpoint value in a rap album that’s just enjoyable to listen to. This album is different: it’s not only an enjoyable listen, but there are distinctive reasons beyond this that make it worthwhile.

Each track is different from the last. “Wade” begins with the classic hymn “Wade in the Water” before the rap fades in. “Calles” has a reggae beat while “Ms. Education of Bling” has strings and piano in the background. The average tempo of songs on the record is slow, and the album is made much more for listening than for dancing.

This group of four refers to themselves both as poets and MCs, which is, after hearing Social Issue, very appropriate. Lyrics are in English and Spanish. Readnex Poetry Squad explores different styles, languages, and content. Overall, this is a very good album with content of substance and diversity from song to song, and even within songs.