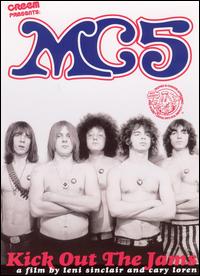 On one hand, it’s necessary to give credit where it’s due: little moving picture footage of the MC5 exists, and Kick Out the Jams co-producers Leni Sinclair and Cary Loren have done a commendable job of synching clips of that footage to (often bootleg-quality) audio of the band. Vocalist Rob Tyner did them an unintentional favor by always holding the mic high, obscuring his mouth. For all we know, the images might be a performance of one song, grafted onto audio of another.

It’s true also that for fans of MC5 (and make no mistake — they’re the intended audience), there aren’t many opportunities for viewing any footage at all of this seminal late 60s group. While the recent theatrical release MC5: A True Testimonial is well produced, exhaustive, and poised to win over those who don’t like or know of the group, that film’s DVD release is held up pending litigation. Indeed, it might never come out (though pirated copies do circulate).

Viewers prone to seizures are hereby advised to avoid the DVD. The swirling, pulsing light show serves as glue to hold the project together, and is appropriate and effective, but wears out its welcome after awhile. Further, the audio edits are jarring and seemingly arbitrary. Even fans of Detroit rock (see also: Amboy Dukes, Frijid Pink, Alice Cooper, The Rationals etc.) might find this disc tough going. Still, as a rare artifact of an important band just now getting its due, Kick Out the Jams is, alas, essential.