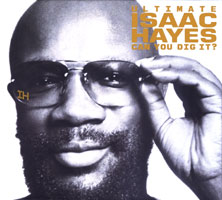 Finally we have an Isaac Hayes career retrospective that is both succinct and sprawling. Of course “The Theme from Shaft” is here; it leads off the first disc on this two-disc, non-chronological compilation of Black Moses’ finest and most commercial offerings. Isaac Hayes is the ideal example of a performer’s artistic aspirations dovetailing perfectly with the zeitgeist, resulting in both critical and commercial success.

Hayes, as presented on Ultimate Isaac Hayes: Can You Dig It?, provides something for every taste. The romantic soul balladeering of slow jams like “Hyperbolicsyllabicsesquedalymistic” flows smoothly into his legendary reinvention of pop hits like the epic “By the Time I Get to Phoenix” and “The Look of Love;” Hayes truly makes the songs his own. His soundtrack work on blaxploitation films like The Men and Three Tough Guys strikes just the right vibe.

The two discs are sonically packed to the limit with classic Hayes, mostly from the Stax era (1966-1975) with a few important later pieces thrown in. A bonus DVD completes the lavishly-appointed set, and includes an excerpt from Hayes’ legendary 1972 performance at the Wattstax festival. Bring things up to date, the DVD includes a clip from South Park, featuring Isaac Hayes in his role as Chef performing the immortal “Chocolate Salty Balls.”

Isaac Hayes’ music is classified as soul. He covered white pop standards. His songs made it onto the charts of soul, R&B and pop. His music is widely sampled by current artists. You can — and should — dig Ultimate Isaac Hayes.